(ther -mŏ-sfeer) See atmospheric layers.
Collins Dictionary of Astronomy © Market House Books Ltd, 2006
The following article is from The Great Soviet Encyclopedia (1979). It might be outdated or ideologically biased.

the layer of the upper atmosphere located between the mesopause—that is, the upper boundary of the mesosphere—and the base of the exosphere. On the average, the thermosphere extends from a height of about 80 km to a height of about 500 km; these limits vary by ±10–20 percent. In English, the term “thermosphere” is often used in a broader sense to mean the region of the atmosphere extending from the mesopause to outer space. In the present article, the term is used in the narrower sense.

The density of the thermosphere varies on the average from 1.8 × 10–8g/cm3 at a height of about 80 km to 1.8 × 10–15g/cm3 at a height of about 500 km. The relative content of the atmospheric components at the mesopause is similar to that at ground level, but the amount of oxygen in the atomic state increases with increasing height. At a level of about 120 km, the separation of gases by diffusion begins. Above the 200–300-km level atomic oxygen, which is lighter than molecular oxygen and nitrogen, becomes predominant; above 500 km, there are significant relative concentrations of even lighter elements, namely, hydrogen and helium. Some of the atoms and molecules in the thermosphere are ionized and are concentrated in several layers (seeIONOSPHERE).

All the characteristics of the thermosphere are subject to rather sizable variations, depending on geographic position, solar activity, season of year, and time of day. The temperature and dynamical conditions of the thermosphere are governed by the energy it absorbs. This energy may originate from nonterrestrial sources or the underlying troposphere.

The major sources of thermospheric energy are: hard solar electromagnetic radiation, which dissociates and ionizes the atmosphere; energetic charged particles (protons and electrons) that penetrate the high-latitude regions of the atmosphere during auroras; atmospheric molecules dissociated into atoms; gravity waves, which may originate both in the troposphere and in the upper atmosphere in the auroral region; and energy dissipation in the thermospheric circulation. The dominant constituents of the thermosphere are nitrogen and oxygen molecules and oxygen atoms, none of which can emit infrared radiation in large amounts. Thus, as a result of insufficient emissivity, the thermosphere is strongly heated, especially at great heights. Under these conditions, heat can be removed only by conduction to the mesopause as a consequence of the positive temperature gradient. A large number of complex molecules, such as carbon dioxide, water, and ozone, are present at the mesopause; these molecules are good emitters of infrared radiation and thus ensure that heat accumulated above the mesopause is removed from the atmosphere.

The thermosphere exerts a drag on artificial satellites, and the behavior of the ionosphere depends substantially on the state of the thermosphere.

[′thər·mə‚sfir]
(meteorology)
The atmospheric shell extending from the top of the mesosphere to outer space; it is a region of more or less steadily increasing temperature with height, starting at 40 to 50 miles (70 to 80 kilometers); the thermosphere includes, therefore, the exosphere and most or all of the ionosphere.
McGraw-Hill Dictionary of Scientific & Technical Terms, 6E, Copyright © 2003 by The McGraw-Hill Companies, Inc. 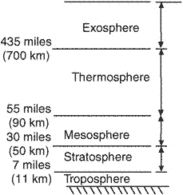 The layer of atmosphere above the mesosphere, which extends from 50 to 55 miles (80-90 km) above the sea level with the upper limit undefined. The temperature in this region initially rises rapidly with heights up to about 120 miles (200 km) and thereafter increases more slowly or not at all. Above 120 miles (200 km), the temperature varies between 600° and 2000°C (1100 and 3600°F), depending on the solar activity. The lower layers of the thermosphere contain enriched ozone.
An Illustrated Dictionary of Aviation Copyright © 2005 by The McGraw-Hill Companies, Inc. All rights reserved