(redirected from thiamine vitamin B1)
Also found in: Dictionary, Medical.
The following article is from The Great Soviet Encyclopedia (1979). It might be outdated or ideologically biased.

(from Latin vita, life), a group of organic com-pounds of varied chemical nature, necessary for nutrition in humans, animals, and other organisms in insignificant quantities compared with the primary nutritional substances (proteins, fats, carbohydrates, and salts) but having enormous significance for normal metabolism and vital functions.

For the most part, plants serve as the primary source of vitamins. Humans and animals obtain vitamins directly from plant food or indirectly through animal products. Microorganisms also play an important role in the formation of vitamins. For example, microflora that inhabit the digestive tract of ruminants supply them with B vitamins. Vitamins enter bodies of animals and humans with food through the wall of the gastrointestinal tract and form numerous derivatives (for example, esters, amides, nucleotides, and so forth), which as a rule, unite with specific proteins to form many enzymes that take part in metabolism. Along with assimilation, uninterrupted dissimiliation of vitamins also occurs in the organism, during which the products of their decomposition (and sometimes also slightly changed molecules of vitamins) are discharged. An insufficient supply of vitamins to the organism results in debility; severe vitamin deficiency causes metabolic disturbances and diseases—avitaminoses—which can lead to the organism’s destruction. Avitaminoses may arise not only from an insufficient intake of vitamins but also from disturbances in the processes of their assimilation and use in the organism.

The founder of vitamin study, the Russian physician N. I. Lunin, established in 1880 that when white mice were fed only an artificial milk consisting of casein, fat, lactose, and salts, the animals died. Consequently, natural milk contains other substances indispensable for nutrition. In 1912 the Polish physician C. Funk, who proposed the name “vitamin” itself, generalized the experimental and clinical data accumulated up to that time and concluded that such diseases as scurvy, rickets, pellagra, and beriberi are diseases of nutritional deficiency, or avitaminoses. From that time, the science of vitamins (vitaminology) began to develop intensively, which may be explained by the importance of vitamins not only in controlling many diseases but also in learning the essence of a number of life phenomena. The method of detecting the presence of vitamins used by Lunin (keeping animals on a special diet, inducing experimental avitaminoses) became the basis of research. It became clear that not all animals need the whole complex of vitamins; that certain species of animals can independently synthesize some vitamins. At the same time, many mold and yeast fungi and various bacteria develop on artificial culture media only when vitamin-containing extracts of plant or animal tissue have been added to them.

The study of vitamins is not limited to discovering them in natural products by means of biological tests and other methods. Active vitamin preparations are obtained from these products, their structures are studied, and finally the individual vitamins are synthesized. The chemical nature of all known vitamins has been investigated. It has turned out that many of them are found in groups of three-five or more related compounds that differ in details of structure and degree of physiological activity. A large number of artificial analogs of vitamins have been synthesized for the purpose of ascertaining the roles of functional groups. This has promoted understanding of the action of vitamins. Thus, some derivatives of vitamins with replaced functional groups have an effect on the organism contrary to that of original vitamins competing with them in bond formation with specific proteins during the formation of enzymes or in bonding with the substrates undergoing enzyme action.

Vitamins have letter designations, chemical names, or names characterizing them by physiological activity. In 1956 a single classification for vitamins was adopted, which has become generally used (see Table 1). The presence of chemically pure vitamins has made it possible to proceed to ascertaining their role in metabolism. Vitamins either enter into the composition of enzymes or are components of enzyme reactions. In the absence of vitamins in the organism, the activity of the enzyme systems, in which vitamins participate, is disrupted, consequently leading to metabolic disturbances. Several hundred enzymes are known which are composed of vitamins and a very large number of reactions which the enzymes catalyze. Many vitamins predominantly function in processes of decomposition of nutritive substances and of freeing the energy locked in them (vitamins B1, B2, PP, and so forth). The following vitamins also function in processes of synthesis: B6 and B12 participate in the synthesis of amino acids and in protein metabolism, B3 (pantothenic acid) in the synthesis of fatty acids and in fat metabolism, Bc (folic acid) in the synthesis of purine, pyrimidine bases, and mariy physiologically important compounds—acetylcholine, glutathione, steroids, and others. The action of fat-soluble vitamins has been less studied;..however, they undoubtedly function in the formation of body structures, for example, in bone formation (vitamin D), in the development of integumentary tissues (vita-min A), and in the normal development of the embryo (vita-min E and others). Thus, vitamins have immense physiological significance. Clarification of their physiological role has made it possible to use them for introduction into food products, in medical practice, and in animal husbandry. Vitamins began to be used especially widely after mastery of their commercial synthesis.

Production of vitamins. Vitamins are obtained primarily synthetically; only in a few cases are certain isolated stages in the chain of synthesis accomplished by biological means. The production of vitamin concentrates from products of plant or animal origin has almost completely lost its significance.

Production of vitamins is a delicate, multistage type of organic synthesis. The following vitamins are synthesized by chemical methods: A, Bl B2, B3, B6, Bc, C, D2, D3, E, K, and PP. B12 is obtained by fermentative methods of microbiological synthesis. Fermentation is also used in one of the stages of vitamin C synthesis. This vitamin, in the form of individual crystals of a high degree of purity, is formed by the reduction of D-glucose to D-sorbitol. The latter is fermentatively oxidized to L-sorbose, which after a number of operations, is converted to Vitamin C (I). Vitamin A (retinol) is synthe-sized, starting with pseudoionone (II), which is cyclized to beta-ionone and then, through a number of complex operations, is converted to retinol (III). Pseudoionone is also used as the starting material in the multistage synthesis of isophytol, used in obtaining pure vitamin E (alpha-tocopheryl acetate, IV).

Vitamin K3 (2-methyl-l, 4-naphthoquinone) is obtained by the oxidation of 2-methylnaphthalene. Vitamin K3 is used in medical practice in the form of an aqueous solution of the sodium salt of a bisulfite derivative (V).

The production of vitamin Bj (thiamine, VI) is based on the condensation of 2-methyl-4-amino-5-chlor(brom)methylpyrimidine with 4-methyl-5-beta-oxyethylthiazolium. The coenzyme of Vitamin BI, cocarboxylase (VII), or diphosphoric ester of thiamine, which is used for treating heart diseases, is obtained by the phosphorylation of thiamine, with the subsequent purification on ion-exchange resins, and by crystallization.

Vitamin B2 (riboflavin, VIII) forms when culturing Eremothecium ashbyii and other microorganisms without isolation in the form of a dry biomass (used only for feeding agricultural animals). Synthetic riboflavin (used in medicine) is obtained in the form of a crystalline product by the destructive oxidation of D-glucose (from cornstarch) to D-arabonic acid and then converted by a number of other operations into the end product—yellow-orange crystals of a high degree of 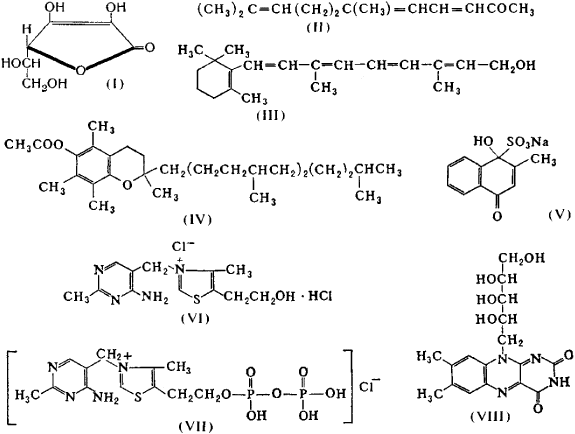 Vitamin B6 (pyridoxine, X,a) is synthesized by condensing methoxyacetyl acetone with cyanoacetic ester in the presence of ammonia to 2-methyl-4-methoxymethyl-5-cyan-6-oxypyridine, which undergoes nitration and is then converted by a number of operations to pyridoxine. Another method of obtaining pyridoxine involves 4-methyl-5-prop-oxyoxazole diene synthesis with the formal of butene-2-diol-l ,4. Other forms of B6 are pyridoxal (X,b) and pyridoxamine (X,c).

Vitamin Bc (folic acid, XI) is synthesized by a one-stage condensation of 2,4,5-triamino-6-oxypyrimidine, 1.1.3-trichloracetone, and p-aminobenzoyl-L-glutamic acid.

is used for medical purposes in the form of a calcium salt.

For purposes of animal husbandry, there is no need to divide the racemate of pantolactone into its optical antipodes at intermediate stages of the synthesis. Synthesis of the racemic pantothenate of calcium involves aldol condensation of isobutyral and formaldehyde, with subsequent conversion to pantolactone, followed by condensation with beta-alanine, which leads to the formation of the end product.

Vitamin B12 (cyanocobalamin), a substance of extremely complex structure, is obtained by means of the microbiological synthesis with Propionbacterium Shermanii in carbohydrate-protein media—byproducts of beet-sugar production (molasses). Fermentation is carried out in the presence of 5,6-dimethylbenzimidazole. The vitamin is isolated in crystalline form. Also important is the technique involving the fermentation of residues from acetone and alcohol plants processing molasses by thermophile, methane-forming bacteria at 55-57° C.

Vitamin D2 (ergocalciferol), which also has an extremely complex structure, is isolated from baker’s yeast in the form of ergosterol, which then undergoes photoisomerization. For medical purposes, ergocalciferol is freed of foreign substances that form during photoisomerization. Vitamin D3 (cholecalciferol) is obtained from cholesterol, a product of the meat industry. It is benzoylated, then undergoes bromination and other operations.

Vitamins and animal husbandry. The significance of vitamins in the feeding of agricultural animals is very great. When vitamins are lacking or absent, growth and development of the young is retarded, resistance to various diseases is lowered, and productivity is decreased. Sterility, abortions, and low productivity are often associated with a vitamin-deficient diet in agricultural animals. Vitamin requirements depend on the species of animal and the animal’s age, physiological condition, productivity, feeding conditions, and maintenance as well as on the organism’s reserves of vitamins. These requirements are especially great in the young, in pregnant and lactating females, and in highly productive and purebred animals. 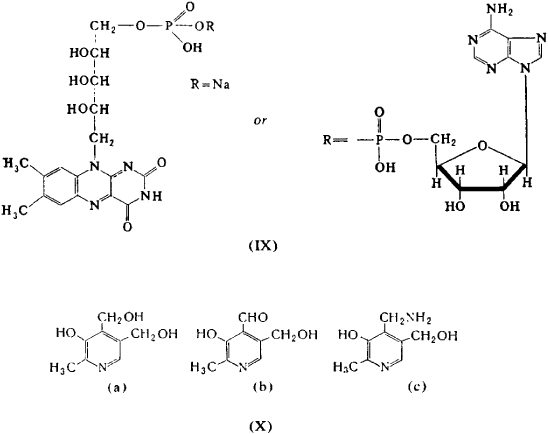 The principal source of vitamins for animals is feed. For proper organization of feeding, it is therefore necessary, in addition to vitamin requirements, to know their content in the feed. Allowances of vitamins for animals are made by the proper selection of feed and the enrichment of rations with vitamin feed or vitamin concentrates produced by industry. Mixed feeds produced by industry contain all the necessary vitamins.