Domed building with a circular plan, such as the Jefferson Memorial in Washington, DC.

(also tholus), a round, usually monumental ritual structure, such as a sepulcher or temple. From the 16th to the 12th centuries B.C., tholi were built in Crete, in Greece (for example, the tholos in Epidaurus; 360–330 B.C., architect Polycleitus the Younger), in Delphi (early fourth century B.C., architect Theodorus of Phocaea), and on the western coast of Asia Minor.

The most impressive tholi, which measure as much as 14 m in height and 14 m in diameter and date from the 14th century B.C., were discovered in Mycenae. In Thessaly and Crete, such structures were built as late as the eighth century B.C. Tholi built under burial mounds in the seventh and sixth centuries B.C. have been found in Etruria, and examples from the fifth and fourth centuries B.C. were discovered in Thrace. The examples in Thrace are similar to the crypts of the Zolotoi (Golden) Barrow and the Tsarskii (Royal) Barrow, structures of the fourth century B.C. near Kerch’. 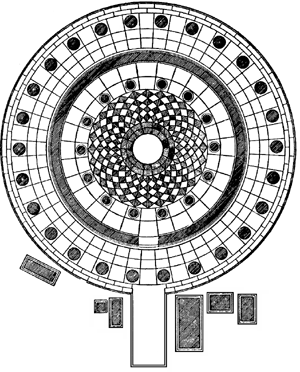 tholos, 1 at Epidaurus, plan
1. In Greek architecture, any round building.
2. The corbeled, domed tombs of the Mycenaean period.
3. A domed rotunda.
McGraw-Hill Dictionary of Architecture and Construction. Copyright © 2003 by McGraw-Hill Companies, Inc.

Feedback
Flashcards & Bookmarks ?
Please log in or register to use Flashcards and Bookmarks. You can also log in with
Flashcards ?
My bookmarks ?
+ Add current page to bookmarks
Mentioned in ?
References in periodicals archive ?
It includes Mycenaean primary burials and deposits labeled "secondary burials" from three sites with two tomb types: chamber tombs and tholoi (Table 3).
Thirty chamber tombs cover the hill; many are located in clusters next to the tumuli and the site's two tholoi (Kolonas 2009:34-35).
Mycenaean Secondary Burial Revisited: Legacy Data, Taphonomy, and the Process of Burial in Achaia, Greece
The locations of some of these tholoi are worth noting.
At Perdigoes, the outer ditch was constructed in such a way to include a couple of pre-existing tholoi in the enclosed area, even if that meant a deviation from a more properly circular layout (Valera et al., 2014: 20-21).
El Foso 1 de Perdigoes dentro de la tradicion arquitectonica monumental de la Prehistoria Reciente en la cuenca media del Guadiana (IV-III milenios cal AC)
(46.) For Mycenaean tholoi, see Lawrence, Greek Architecture, chap.
(47.) For the Minoan burial structures and their differences from Mycenaean tholoi, see ibid., 32-34, 41, 66, 78, 86; figs.
The Canopy of Holiness at the Misericordia in Florence and its sources (Part One)
(77) Furthermore, the little Mycenaean evidence that can be considered reliable as an indication of communal rites practiced near tombs comes from inside single funerary complexes and tombs, that is, in the dromoi and near the stomia of the tholoi and inside the tumuli and funerary enclosures.
Aegean feasting: a Minoan perspective
Levels VI-XI predate TT 10 and are subdivided as follows: level VI (layers 11-13), level VII (layers 14-16), levels VIII-XI (tholoi area only, layers not numbered) and l ayers 17-42 (outlying area).
The Halaf Period in Northern Mesopotamia
En el area de Barcarrota se ha senalado la existencia al menos de dos posibles tholoi: la Mata y la Pestana (Fig.
El dolmen del Milano y la articulacion territorial del fenomeno megalitico en el area de Barcarrota (Badajoz)
In the exposure of eight hundred square meters were eight rectilinear multi-room buildings, four circular structures ("tholoi"), and ovens.
Tell Sabi Abyad, the Late Neolithic Settlement: Report on the Excavations of the University of Amsterdam (1988) and the National Museum of Antiquities Leiden (1991-1993) in Syria. Two volumes
Wright de voir dans les plus grandes tholoi de Khirokitia des lieux reserves a des rites sacres lies a la reproduction de la vie de la communaute au Neolithique; la decouverte d'E.
Trade, Contact, and the Movement of Peoples in the Eastern Mediterranean: Studies in Honour of J. Basil Hennessy