thread
This article is provided by FOLDOC - Free Online Dictionary of Computing (foldoc.org)
The following article is from The Great Soviet Encyclopedia (1979). It might be outdated or ideologically biased.

industrial processes for producing threads through removal of a chip from the surface of various articles. Threading is performed using special thread-cutting, nut-tapping, bolt-screwing, and thread-grinding machines, as well as automatic, semiautomatic, and turret lathes. 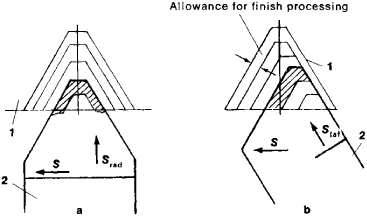 Figure 1. Threading on a lathe: (a) by the copying method; (b) by the generating method; (1) thread profile; (2) cutting tool; (S) cutting-tool feed, equal to the thread pitch; (Srad) radial feed; (Stat) lateral feed

The simplest threading method uses taps and dies and is done manually, using nut-tapping and bolt-screwing tools. Threading on lathes is performed with cutting tools in several passes (Figure 1). Thread with a pitch S ≦ mm is cut by the copying method with radial feed, whereas thread with S ≧ 2.5 mm is cut first by the generating method with lateral feed (rough passes) and then by the copying method (finishing passes). Threading with cutting tools is a process of low productivity, but it is capable of producing thread with low surface roughness (grade ▽8-▽9), which corresponds to precision class 4. Threading by means of thread chasers and cutters increases productivity, since such methods make possible production of the thread in a single pass.

The most advanced method of threading, called the highspeed or vortex method, makes possible an increase in productivity’by a factor of 2.0–2.5 as compared to the production rate with thread cutters and by a factor of more than 10 as compared to methods using cutting tools. Threading by the high-speed method is performed using methods of generating and envelopment (Figure 2). The cutting head, with one or more cutters equipped with hard-alloy cutting bars, is mounted eccentrically with respect to the blank being machined. The blank rotates at 30–300 rpm in one direction, and the cutting head rotates at 1,000–3,000 rpm in the opposite direction. The blank is advanced axially by one step, corresponding to the pitch of the thread, during each revolution. Each cutter touches the blank once each revolution. The cutting speed may be as high as 400 m/min. The method is applicable to threading on both exterior and interior surfaces with diameters of more than 50 mm and provides surface roughness of class 6 (▽6) and precision of class 5–6. Threading may also be performed by plastic deformation (thread knurling).

A feature within a CPU that allows two or more instruction streams (threads) to execute concurrently. Each stream is a "subprocess" that is managed by the CPU and operating system. Multithreading takes advantage of the superscalar architecture in most CPUs combined with the fact that while one operation takes place, very often another can proceed simultaneously. For example, as soon as an instruction to output data to storage is given, a huge number of data processing instructions (compare, copy, goto, etc.) can be executed while storage is being written. Depending on the program logic, instructions can be executed out of sequence and benefit from some overlap.

Both operating systems and applications may be written to use threads. However, designing the program logic for multithreading that ensures instructions are always executed without conflict can be a daunting task.

Multicore vs. Multithreading
Multicore CPUs have two or more processing cores, each capable of executing instructions in parallel. In fact, except for low-cost microcontrollers, most CPUs have two or more cores. In contrast, multithreading occurs within a single processing core to increase performance approximately 25%. Each thread is a "logical core" rather than a physical core. See microcontroller.

Today's CPUs generally support at least two threads per core, but some handle many more. For example, IBM's POWER10 CPU comes with up to 15 cores, and each core handles eight threads for a total of 120 threads. Tasks such as video rendering and machine vision, which perform millions of identical calculations on a matrix of pixels, are candidates for multithreading. See superscalar, SMP, re-entrant code, multicore, multiprocessing and Hyper-Threading.

Feedback
Flashcards & Bookmarks ?
Please log in or register to use Flashcards and Bookmarks. You can also log in with
Flashcards ?
My bookmarks ?
+ Add current page to bookmarks
Mentioned in ?
References in periodicals archive ?
This proposal saved us a long shutdown time." The ropeless tail threading is working well.
Sheet wrinkles ironed out at Kruger/Trois-Rivieres: this mill discovered that, with new HS blowbox technology, the price of speed need not include wrinkling
This threading architecture associates a group of Reactors with a group of threads running at different priorities.
Evaluating architectures for multithreaded object request brokers: developing threading architectures capable of efficient handling of multiple clients presents challenging complexity
The tool workers dip their threading tool in a crock containing a lubricating and cooling solution made of ammonia, graphite, and water after each tooling to prevent the glass from locking onto the tool.
Threading glass for strong sealings
"Further, since the thread is being cut in the subspindie while the main spindle is producing the next part, the threading cycle time is free and thereby increasing throughput."
Thread whirling in the subspindle
The Posimatic system covers a broad range of applications including turning, boring, threading, grooving, and cutoff.
Swiss-style tooling
With so many tools in the market for threading applications, consulting with cutter experts and choosing the best tool will improve productivity and quality, while reducing cost in your holemaking operation.
Many ways to thread that hole: examine options carefully to maximize results
In the March 2004 Tooling Around column, we looked at the chip loads exerted on the very small working area of single point threading inserts, as well as the different choices for infeeds, (see the Archives link at Tooling and Production's website: www.toolingandproduction.com).
Canning the canned threading cycle
In evaluating all of the different tool operations in turning, single point threading likely ranks as the most difficult and problematic.
Selecting threading infeed methods
Shown at the open house was Okuma's latest technology in precision-machined threading on Okuma 2- and 4-axis CNC lathes that offer Okuma's variable speed threading capability.
Taking the chatter out of threading: it's critical in oil country tubing
The production of an external or internal thread requires several passes with a single-point threading tool.
Threading methods. (T&P Shop Talk)
Landis Solid Carbide thread milling tools (shown here) are offered in DFZ grade for threading ferrous, non-ferrous, stainless and aerospace alloys.
Thread milling tools. (Cutting Tool Talk)