any of various large sharks of the genus Alopias, esp A. vulpinus, occurring in tropical and temperate seas: family Alopiidae. They have a very long whiplike tail with which they are thought to round up the small fish on which they feed
Collins Discovery Encyclopedia, 1st edition © HarperCollins Publishers 2005
The following article is from The Great Soviet Encyclopedia (1979). It might be outdated or ideologically biased.

a machine for separating seeds from the ears, tassels, heads, and cobs of agricultural plants.

The introduction of threshers began in the 17th century. The first threshing device in Russia was developed by the artisans Andrei Terent’ev and Moisei Krik in 1655. A rotating threshing drum with three-sided beaters that was partially encircled by a cylindrical casing was manufactured in Scotland in the late 18th century. The threshing device and beater drum were further refined and later used in threshers and grain-harvesting combines. In the first half of the 19th century a threshing device with a toothed drum and concave was proposed. This combination was the basis for creation of the thresher and later was used in combines with toothed drums. All the parts of the thresher except the drum were made of wood. The first threshers were operated manually. The production of threshers powered by horses began in Moscow in 1809. The first threshers only threshed the crop; they did not separate the grain from the chaff. With the introduction of the straw separator, which divided the products of threshing into straw and grain, semicompound threshers were created; with the installation of cleaners, they became finisher threshers, or separators. The latter produce high-quality market grain and are driven by steam or internal-combustion engines or electric motors.

A corn sheller (Figure 1) threshes the ears, separates the cobs, and cleans light impurities from the grain. The working parts of the thresher are driven by a 7.5-kilowatt (kW) electric motor. The loading elevator feeds ears from the receiving bin into the threshing device, which consists of a toothed drum and a cylindrical grate concave. The threshed grain passes through the holes of the concave and falls onto the cleaning screen, where a ventilator blows light impurities out of the material. The cleaned grain is transferred to containers by an elevator. An ear conveyor throws the cobs to the side of the sheller. The productivity of the machine is up to 3 tons per hr. 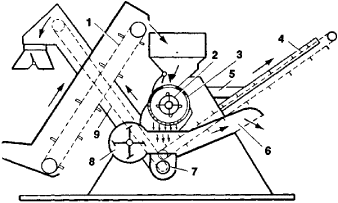 Flax, hemp, and kenaf threshers are similar in their functional diagrams but differ somewhat in design. These types of threshers comb and thresh sheaves of bast crops, grind the heap, and clean the seeds. To perform these operations, the threshers have a gripping conveyor with platforms for feeding and removing the combed sheaves, combing and rubbing devices, a screen (a sieve pan with sieves and a ventilator), a seed elevator, and transmission mechanisms. The threshers are driven by power takeoff shafts from the tractor engine. Their productivity for bulk sheaf hemp is up to 1.4 tons per hr; for kenaf, up to 2.3 tons per hr.

A vegetable thresher (see Figure 2) is designed to thresh seed-bearing plants and partially remove the seeds of vegetable crops. It can thresh grain crops and thresh and remove seeds from grasses. During threshing, the seed-bearing plants are placed manually on the feed conveyor, which carries them to the blades of the grader, and then the beater drives the heap into the threshing apparatus, which consists of a beater drum and a grate concave. After threshing, the heap passes into the straw separator. Some of the seeds and their shells, after passing through the openings of the concave and straw separator, reach the rubbing device, which rubs out the shells and throws the threshed 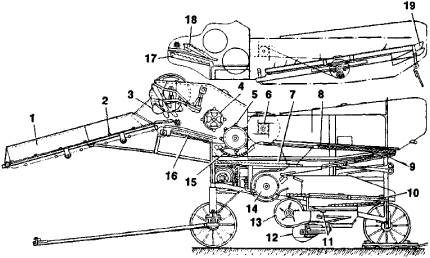 material onto the sorter screens, where a stream of air from the ventilator separates waste material from the seeds. The clean seeds pass through the openings of the screens and fall onto a conveyor, which drops them into containers. For threshing grain crops, a shaking board and oscillating feeder are used instead of the blade grader, and the grate-type straw separator is replaced by an oscillating separator. Threshers produced in the USSR are driven by a 10-kW electric motor and have a productivity up to 500 kg/hr for threshing seed-bearing vegetable crops and up to 3,000 kg/hr for threshing grain crops.

Stalk threshers (see Figure 3) are designed to produce undamaged threshed stalks of ear grain crops for use in making mats to cover hothouses and clamps for sugar beets, potatoes, and table root crops. The main parts of such threshers are a gripping conveyor, a stripping cylinder, a mobile frame with six beater drums, a conveyor for threshed material, and a 4.5-kW electric motor. The gripping conveyor feeds a hand-graded layer of stalks into the threshing chamber. The frame, together with the rotating beater drums, moves back and forth and threshes the ears. The length of the stroke of the frame and the distance between the upper and lower drums can be regulated. The strip-ping cylinder removes the tangled stalks from the thick ends of the plants. The productivity of this type of machine is up to 1.2 tons per hr. 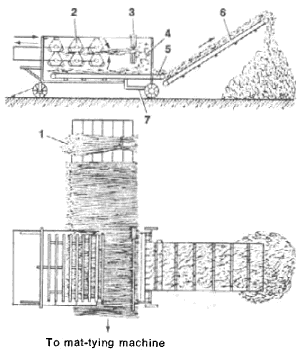 Feedback
Flashcards & Bookmarks ?
Please log in or register to use Flashcards and Bookmarks. You can also log in with
Flashcards ?
My bookmarks ?
+ Add current page to bookmarks
Mentioned in ?
References in periodicals archive ?
Magnificent but little-known threshers dominated the first day's action.
Sharks are unfairly demonized
S., has new life as a 182-room Canopy by Hilton Hotel, the "highest and best use" for the former home of the Advance Thresher Co., said Chris Sherman, Sherman Associates' senior vice president of operations and capital markets.
Historic state tax credit is in peril, advocates say
There he continued to tinker with his thresher, first adding a fanning mill directly into the unit.
Who was J.I. Case? SELF-MADE MAN LAUNCHED COMPANY THAT WOULD LEAVE LASTING MARK ON AMERICAN AGRICULTURE
Target: Thresher Communication and Productivity, Computer Maintenance Agency
Deal snapshot: RAHI SYSTEMS EXPANDS PORTFOLIO OF IT SOLUTIONS WITH ACQUISITION
For the Razer Thresher headset, users can choose a wireless 2.4 GHz connection or a wired 3.5 mm connection.
Razer unveils officially licensed Raiju controllers and Thresher headset for Sony PlayStation 4
Responding to a query about measures to minimise the effects of wheat grain dust, the expert suggested that people should ensure maximum use of mask during outdoor movement especially in wheat thresher season.
Wheat grain dust creating asthma complications
Thresher sharks are large lamniform sharks belonging to the Alopiidae family and are found in all temperate and tropical oceans of the world.
300 Shark Carcasses Found On Mexican Highway
If you're more inclined to take a DIY approach, browse the numerous videos on YouTube showing creative homemade thresher setups, including one that uses an electric drill to spin a short chain inside a 5-gallon bucket--details at http://goo.gl/eCbNtb.
2 new tools: grain thresher and cider press
A truck carrying at least 467 kilograms of thresher shark meat, 170 pieces of plastic bags containing shark skin and a shark torso was intercepted in Naga City around 10:30 p.m.
Shark meat for fish balls seized in Cebu town
"We want to provide the best customer service," Thresher says, but also accomplish that in an effective and efficient manner.
Nationwide Q4 Results Rise; CFO Discusses Distribution and Rate Environment
The fluctuation in speed was reduced to 3.05 times and coefficient of energy 3.11 times than that of conventional thresher By redesigning and redeveloping the direction of fan blower exhaust, the mean grain cleaning efficiency improved from 97.44 to 98.18 % causing elimination of grain loss through straw blowing process.
DESIGN IMPROVEMENT OF INDIGENOUS BEATER WHEAT THRESHER IN PAKISTAN