In an arched structure, the line of action of the resultant compressive force.
McGraw-Hill Dictionary of Architecture and Construction. Copyright © 2003 by McGraw-Hill Companies, Inc. 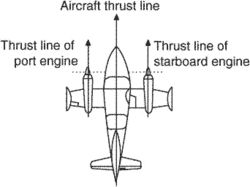 An imaginary line through which the resultant thrust acts. The line may refer to the thrust axis of one engine or of the whole aircraft.
An Illustrated Dictionary of Aviation Copyright © 2005 by The McGraw-Hill Companies, Inc. All rights reserved

Feedback
Flashcards & Bookmarks ?
Please log in or register to use Flashcards and Bookmarks. You can also log in with
Flashcards ?
My bookmarks ?
+ Add current page to bookmarks
Mentioned in ?
References in periodicals archive ?
This created a strategic vacuum along the Indian thrust line as there was no major armored force available to contest the advance from Chawinda to Pasrur.
Adieu Brig Nisar Kaka(SJ)
The Cessna is designed so that its thrust line is positioned at or slightly below its center of gravity while the Lake's thrust line is well above its CG.
But what we really want to get at is the relationship of the thrust line to the airplane's center of gravity (CG), and how the two can interact.
Since the only major changes to the configuration involve the placement of its engines, it's a fair presumption that the MAX's relationship between CG and thrust line changed.
Power And Pitch: Using them together means understanding how they affect each other, and that can depend on the airplane
The northeastern limb of thrusted Abbottabad anticline is relatively normal and less faulted while the southwestern limb is overturned and shows active thrust line. The maximum throw (vertically displaced more than one kilometer) of this anticline is observed in the southwestern limb ofBalakot-Muzaffarabad area.
This thrust line generally trending from Muzaffarabad to Balakot, indicating this as an active thrust.
Geodisaster and lithostratigraphy of doubly plunging thrusted Muzafarabad anticline, Muzaffarabad District, Sub Himalayas, Azad Kashmir, Pakistan
"More [important] for landing is the good design and engineering relative to the placement of the thrust line," he said.
Innovative engineering makes flying car dreams a reality
The most recent Mark II conversion of the 206 using the Rolls Royce 250-B-17/2 engine has a lower thrust line, better visibility over the nose, plus the turbine reliability and power that's unmatched by a piston.
Gear of the year: Cirrus Aircraft: Cirrus Aircraft wins our editors choice award for the company of the year. Their innovative success leads the way in an otherwise dismal aircraft market
One appendix describes how you can carry out your own 'thrust line analysis' of an arch, while another tabulates Lancaster's analysis of rubble samples from key buildings to show that building materials were being imported into Rome from Vesuvius throughout the study period.
Vaulting ambition
Referring to Figure 2, also on the opposite page, the larger the arm "a" of the asymmetric thrust line, the larger the zero-sideslip bank angles must be.
Raising the dead: in conventional twins, juggle weight, speed, bank angle and altitude to achieve maximum single-engine performance