semiconductor switch used chiefly in power-control applications. Also called a silicon-controlled rectifier (SCR; see rectifierrectifier,
component of an electric circuit used to change alternating current to direct current. Rectifiers are made in various forms, all operating on the principle that current passes through them freely in one direction but only slightly or not at all in the opposite
..... Click the link for more information. ), it is a variation of the transistortransistor,
three-terminal, solid-state electronic device used for amplification and switching. It is the solid-state analog to the triode electron tube; the transistor has replaced the electron tube for virtually all common applications.
..... Click the link for more information. . A thyristor is capable of producing large direct currents by rectification of alternating currents and can be automatically triggered "off" for specified periods of time. Thyristors are used in variable-speed electric motors, power supplies for electrochemical processes, lighting and heating control, and controllers for electric utility power systems.
The Columbia Electronic Encyclopedia™ Copyright © 2013, Columbia University Press. Licensed from Columbia University Press. All rights reserved. www.cc.columbia.edu/cu/cup/
The following article is from The Great Soviet Encyclopedia (1979). It might be outdated or ideologically biased.

a monocrystalline p-n-p-n semiconductor device that has the properties of a rectifier and possesses a nonlinear discontinuous volt-ampere characteristic. An anode and a cathode are in contact with the outer layers, or regions, of the single crystal, and, in most thyristors, a control electrode, or gate, is connected to one of the center layers. The anode and cathode are connected to the power circuit and a heat-dissipation device.

When a forward voltage Ufo is applied to the anode and cathode, as is shown in Figure 1, the first (J1) and third (J3) p-n junctions are forward-biased, and the second junction (J2) is reverse-biased. Minority carriers are injected through J1 and J3 into the regions adjacent to J2. The injection reduces the junction’s resistance, increases the current through the junction, and reduces the voltage drop across it. When the forward voltage is increased, the current through the thyristor at first rises slowly, as is indicated by the segment OA of the volt-ampere characteristic (Figure 2). Under these conditions, the thyristor can be regarded as in the off state, since the resistance of J2 is still very high; moreover, the voltages across J1 and J3 are low, and almost all the applied voltage is across J2. As the voltage across the thyristor is raised, the share of the voltage across J2 diminishes, and the voltages across J1 and J3 increase more rapidly. As a result, the current flowing through the thyristor undergoes a further increase, and the injection of minority carriers into the vicinity of J2 is intensified. When the voltage reaches a certain value, which is called the forward breakover voltage Ufb, (point A on the volt-ampere characteristic) and is of the order of tens or hundreds of volts (V), the process becomes avalanche-like, the thyristor switches into the on state (conducting condition), and a current flows through the thyristor that depends on the source voltage and the resistance of the external circuit (point Con the volt-ampere characteristic). 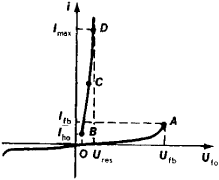 The abrupt switching of a thyristor from a low-conductivity state to a high-conductivity state can be explained by regarding the thyristor as a combination of two transistors T1 and T2 that are connected opposite each other (Figure 3). The outer regions of the single crystal are emitters; the p-layer is called an anode emitter, and the n-layer is called a cathode emitter. The middle layers are a collector in one transistor and, at the same time, a base in the other transistor. The current i flowing through the external circuit of the thyristor is the same as the current of the first emitter iE1 and as the current of the second emitter iE2. Moreover, this current consists of the reverse current iC0 through the collector junction and the two collector currents iC1 and iC2, which are equal to α1iE1 and α2iE2, respectively, where α1, and α2 are the emitter-to-collector current gains for transistors T1 and T2. Thus, i = α1iE1 + α2iE2 + iC0. Since iE1 = iE1 = i, we have

At low currents, α1 and α2 are considerably less than 1, and their sum is also less than 1, As the current increases, α1 and α2 increase, and this increase leads to a rise in i. When i reaches a value called the forward breakover current Ifb, the sum α1 + α2becomes approximately equal to 1, and the current rises abruptly to a value limited by the load resistance (point C in Figure 2).

Every thyristor has a maximum permissible value of the forward current Imax (point D in Figure 2), at which there is a small residual voltage Ures across the device. If the current through the thyristor is reduced, then at some level called the holding current Iho (point B in Figure 2) the thyristor switches into the off state, that is, the low conductivity state corresponding to the segment OA of the volt-ampere characteristic.

When a reverse voltage is applied to a thyristor of the type described, the curve showing the dependence of current on voltage has the same appearance as the corresponding part of the volt-ampere characteristic for a semiconductor diode. 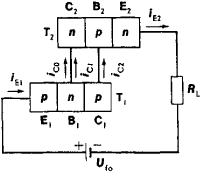 The described method of turning on a thyristor by increasing the applied forward voltage is used in reverse-blocking diode thyristors. The most widespread type of thyristor, however, is switched into the on state by supplying to the gate circuit a current pulse of a certain magnitude and duration when there is a positive potential difference between the anode and cathode. Such devices are usually called silicon-controlled rectifiers, or reverse-blocking triode thyristors. Light-activated thyristors, which are switched into the high-conductivity state by the action of light, form a special group. Thyristors are turned off either by reducing the current through them to the value Iho or by reversing the polarity of the voltage drop between the anode and cathode.

Depending on their use, thyristors are classified as unidirectional, bidirectional, high-speed, high-frequency, pulsed, double-mode, and special-purpose.

Thyristors are fabricated from monocrystalline silicon chips or pellets, the silicon being doped with boron, aluminum, or phosphorus. Doping is generally carried out through diffusion and alloying techniques. The thyristor is enclosed by a hermetically sealed housing. To provide mechanical strength and to avoid thermal stresses due to the difference between the expansion coefficients of the silicon of the pellet and the copper of the electrodes, temperature-compensating disks of tungsten or molybdenum are placed between the crystal and the electrodes. Heat is dissipated from one side of the thyristor in the case of stud-mounted or flat-base-mounted types with metal or cermet housings and in the case of pressure-mounted types. In tablet types, heat is dissipated from two sides. The most commonly used designs are the stud-mounted, flat-base-mounted, and tablet types. Air-cooling is used for thyristors for currents of up to 500 amperes (A); thyristors for currents above 500 A are usually watercooled.

Present-day thyristors are manufactured for currents ranging from 1 milliampere to 10 kiloamperes and for voltages ranging from several V to several kilovolts. The rate of rise of the forward current reaches 109 sec, and that of the forward voltage reaches 109 V/sec. Thyristors can be turned on in several tenths to several tens of microseconds (μsec) and can be turned off in a few μsec to several hundred μsec. The efficiency can be as high as 99 percent.

Thyristors are used, for example, as rectifiers in electric-power converters (seeCONVERSION TECHNOLOGY and ), as actuating and amplifying elements in automatic control systems, and as switches and memory elements in various types of electronic equipment. By the mid–1970’s thyristors, along with other semiconductor devices, had largely supplanted vacuum and gas-filled rectifiers.

[thī′ris·tər]
(electronics)
A transistor having a thyratronlike characteristic; as collector current is increased to a critical value, the alpha of the unit rises above unity to give high-speed triggering action.
McGraw-Hill Dictionary of Scientific & Technical Terms, 6E, Copyright © 2003 by The McGraw-Hill Companies, Inc.

A semiconductor component that is unidirectional like a diode, but is switched like a transistor. It is widely used to control high currents and voltages in motors, lighting, heating and power applications. Once turned on at the gate, it allows current to flow until it falls below a certain threshold. In an AC circuit, it stops conducting each time the wave crosses over zero and can rectify AC to DC. See diode, PN junction and n-type silicon.

Feedback
Flashcards & Bookmarks ?
Please log in or register to use Flashcards and Bookmarks. You can also log in with
Flashcards ?
My bookmarks ?
+ Add current page to bookmarks
Mentioned in ?
References in periodicals archive ?
"Voltage Sag Mitigation by Thyristor Controlled Series Capacitors", 8th International Conference on Harmonics and Quality of Power ICHQP'98, IEEE/PES, Athens, Greece, pp: 572-576.
Improving power quality using thyristor controlled series capacitor
At the firing angles of thyristor converter 0 < [alpha] [less than or equal to] 45[degrees], which correspond to the current APF regime, efficiency of reactive power compensation exceeds 99% as at Fryze theory as using p-q theory.
Study of three-phase active power filter operation using non-sinusoidal voltage
While OLSPC motor is supplied by sinusoidal voltage, when increasing a load, efficiency and power factor decreases significantly while increasing thyristor firing angle and frequency.
Investigation of energetic parameters of oscillating synchronous pulsating current motors/Svytuojamuju sinchroniniu pulsuojamosios sroves varikliu energetiniu parametru tyrimas
The general forward switching condition for thyristor structures is [1]
Comparison of turn-on characteristics of thyristor structures based on wide bandgap materials/Laia keelutsooniga materjalidel pohinevate turistorstruktuuride umberlulituskarakteristikute vordlus
The first Wespack(TM) devices, the N2593MK180 and N2367MK220 are respectively 1800V and 2200V rated thyristors, with current ratings of 2593A and 2367A.
WESTCODE LAUNCHES WESPACK PHASE CONTROL THYRISTORS
There are water-cooled thyristor valves suspended from the ceilings of the Radisson, Nicolet, and Sandy Pond terminals that control the flow of electricity when they are activated.
Connecting the world's electrical grids