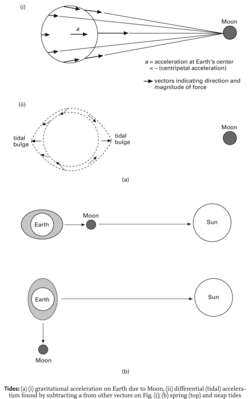 Tides: (a)(i) gravitational acceleration on Earth due to Moon, (ii) differential (tidal) acceleration found by subtracting a from other vectors on Fig. (1); (b) spring (top) and neap tides

The daily rotation of the Earth and the slower eastward revolution of the Moon in its orbit produce (usually) two high tides and two low tides every 24 hours 50 minutes. The rotation and lunar revolution are also responsible for a tidal lag between the time when the Moon crosses the local meridian and the time of high tide.

The tidal pull of the Sun is less than half that of the Moon but reinforces it at full Moon and at new Moon to produce very high, or spring tides; these tides are exceptionally high when the Earth is close to perihelion and the Moon is close to perigee (see illustration (b)). The lowest high tides, or neap tides, occur when the Moon is at quadrature. The tidal height depends on the topography of the coastline and on the area of the adjacent continental shelf. Tides are also generated in the Earth's atmosphere and in the solid Earth.

Lunar tides are raised by the Earth as a consequence of the Moon's eccentric orbit. They trigger moonquakes and transient lunar phenomena. See also tidal friction.

Feedback
Flashcards & Bookmarks ?
Please log in or register to use Flashcards and Bookmarks. You can also log in with
Flashcards ?
My bookmarks ?
+ Add current page to bookmarks
Mentioned in ?
References in classic literature ?
"The tides are not strong in the Pacific: you are right there, Professor; but in Torres Straits one finds still a difference of a yard and a half between the level of high and low seas.
View in context
"Even at high tide the creeks never reach so far as the back there.
View in context
A thousand times no; and I wept tears of sweet sadness over my glorious youth going out with the tide. (And who has not seen the weeping drunk, the melancholic drunk?
View in context
Trusting to the girl's skill and making no use of the rudder, he eyed the coming tide with an absorbed attention.
View in context
Nor yet we can't no more hold their tide than I can hold this.
View in context
Finally we had the satisfaction of seeing the vessel rise out of the mud and float slowly upstream with the tide. As the water rose we pulled her in quite close to the bank and clambered aboard.
View in context
"Yes, monsieur," replied one of them, "we are only waiting for the tide."
View in context
San Rafael Creek, up which we had to go to reach the town and turn over our prisoners to the authorities, ran through wide-stretching marshes, and was difficult to navigate on a falling tide, while at low tide it was impossible to navigate at all.
View in context
While I was doing this, I found the tide begin to flow, though very calm; and I had the mortification to see my coat, shirt, and waistcoat, which I had left on the shore, upon the sand, swim away.
View in context
Jo could not speak, and for several minutes there was no sound but the sigh of the wind and the lapping of the tide. A white-winged gull flew by, with the flash of sunshine on its silvery breast.
View in context
The South Spit was just awash with the flowing tide; the waters heaved over the hidden face of the Shivering Sand.
View in context
With that sort of spiced food provided for his anxious thought, watchful for strange men, strange beasts, strange turns of the tide, he would make the best of his way up, a military seaman with a short sword on thigh and a bronze helmet on his head, the pioneer post- captain of an imperial fleet.
View in context