any species of the genus Dentaria [Lat. dens=tooth, for the toothed rhizomes of some species], slender perennials of the family Cruciferae (or Brassicaceae; mustardmustard,
common name for the Cruciferae, or Brassicaceae, a large family chiefly of herbs of north temperate regions. The easily distinguished flowers of the Cruciferae have four petals arranged diagonally ("cruciform") and alternating with the four sepals.
..... Click the link for more information.  family), native to north temperate regions. North American species are found chiefly in the eastern half of the continent and in the Pacific coastal region. The edible rhizomes have a pungent flavor similar to that of watercress, giving the name pepperwort to some species. D. diphylla, also called crinkleroot, is common to the E United States and was eaten raw or boiled by the Iroquois. It is sometimes cultivated for its large white or purple blossoms. Toothworts are classified in the division MagnoliophytaMagnoliophyta
, division of the plant kingdom consisting of those organisms commonly called the flowering plants, or angiosperms. The angiosperms have leaves, stems, and roots, and vascular, or conducting, tissue (xylem and phloem).
..... Click the link for more information. , class Magnoliopsida, order Capparales (or Brassicales), family Cruciferae (or Brassicaceae). 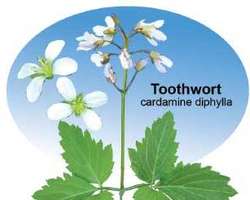 Has 4 petaled white flowers. Helps with toothache. The root tastes peppery kind of like horseradish and can be chewed for colds and flu or made into tea to gargle with for sore throat. Used to spice up food. The entire plant can be used- leaves, stems, flowers, root. Add to your salads, rice etc. Even when the leaves are gone, the roots are still underground and edible.