[′tȯr·əs]
(anatomy)
A rounded protuberance occurring on a body part.
(botany)
The thickened membrane closing a bordered pit.
(mathematics)
The surface of a doughnut-shaped object.
The topological space obtained by identifying the opposite sides of a rectangle.
The group which is the product of two circles.
McGraw-Hill Dictionary of Scientific & Technical Terms, 6E, Copyright © 2003 by The McGraw-Hill Companies, Inc.
The following article is from The Great Soviet Encyclopedia (1979). It might be outdated or ideologically biased.

a geometric solid formed by the rotation of a circle about a line lying in the plane of the circle but not intersecting the circle (see Figure 1). A torus is shaped approximately like a doughnut or a life ring. If the radius of the rotating circle is r and 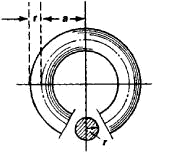 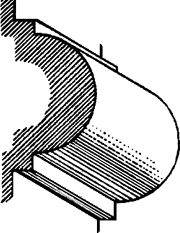 torus
A bold projecting molding, convex in shape, generally forming the lowest member of a base over the plinth.
McGraw-Hill Dictionary of Architecture and Construction. Copyright © 2003 by McGraw-Hill Companies, Inc.