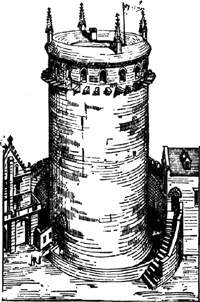 keep
The stronghold of a medieval castle, usually in the form of a massive tower, and a place of residence, esp. in times of siege.
McGraw-Hill Dictionary of Architecture and Construction. Copyright © 2003 by McGraw-Hill Companies, Inc.

Feedback
Flashcards & Bookmarks ?
Please log in or register to use Flashcards and Bookmarks. You can also log in with
Flashcards ?
My bookmarks ?
+ Add current page to bookmarks
References in periodicals archive ?
From the 90ft tower keep there are views to Orford Ness, a 10- mile shingle spit, now a nature reserve.
Blazing saddles Blazing saddles; LEAVE THE CAR AT HOME AND GET ON YOUR BIKE TO GO EXPLORING
"I will need a lot of luck, but as long as those horses such as Passage Of Time, Multidimensional and Phoenix Tower keep sound and the three-year-olds like Twice Over and Kandahar Run materialise, there is a lot to look forward to."
Cecil string back over hundred mark again
The massive ruins of Henry II's 12th Century tower keep, set within the earthworks of a Roman fort guarding the strategic Stainmore pass over the Pennines, is a subject which would have captured Turner's imagination.
Turner watercolour is on its way home
Encyclopedia browser ?
Full browser ?
CITE
Site: Follow: Share:
Open / Close