1. a hypnotic state resembling sleep
2. Spiritualism a state in which a medium, having temporarily lost consciousness, can supposedly be controlled by an intelligence from without as a means of communication with the dead
3. a type of electronic dance music with repetitive rhythms, aiming at a hypnotic effect
Collins Discovery Encyclopedia, 1st edition © HarperCollins Publishers 2005 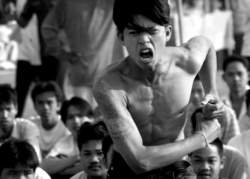 A Thai man goes into a trance and races towards a stage area during an occult rite at Bang Phra Temple, 30 miles west of Bangkok. AP/WideWorld Photos.

Beta is the usual wide awake mode. During this mode, up to seventy-five percent of consciousness is spent monitoring physical functions. The next step down, alpha, is achieved in meditation. It is also the state for daydreaming, the hypnagogic state (just prior to falling asleep at night), and the hypnopompic state (just coming out of sleep in the morning). Alpha would be regarded as a “light trance” state.

The theta state is the equivalent of a light sleep, where there is a general unawareness of what is going on around the person. It is possible to achieve this state when in deep meditation. Delta, the deepest level, is sound asleep with no knowledge whatsoever of what is happening. It is the equivalent of somnambulism in hypnosis.

Trance in the Spiritualistic sense is the freeing of the spiritual perception, the freeing of those faculties which belong to the spiritual-being, and thereby suspending the physical-being. As the physical senses become dormant, there is a sinking sensation, or depending on the individual, it can be a soaring sensation. It is a sensation of freedom, of leaving the earthly restrictions on the physical body. Many mediums say that when going into trance it helps to be working in a circle of like-minded people. Whether or not they are all holding hands, there is a concentration of energies that can be enormously beneficial to the medium in passing into trance and establishing contact with the spirit world. The British medium ivy Northage said,

The medium’s mind is taken over to a greater or lesser degree by the controlling spirit. In my own case this was a gradual process of complete withdrawal on my part and an increasing command on Chan’s [her spirit guide]. Its purpose in psychic and spiritual terms is to extend the power of spiritual influence to reach and obtain more positive response in communication with the other world. Many would-be mediums believe trance work will automatically separate them from subconscious interference, but this is not so. Its first essential is a loose etheric body, together with a mental confidence in their own purpose and the ability of the guides who work with them. It is never a substitute for positive mediumship, but can reduce obstruction to spirit activity by creating a real dependence upon the guide, thus enabling him to work more freely. This must depend upon the depth of trance and the ability of the medium to control his own thoughts and emotions.

Not all Spiritualist mediums go into trance. John Edward is a good example of someone who operates in full consciousness (and in full light) and is extremely effective in his spiritual contact. But for every one that does not go into trance, there are many more who do, though the depth of that trance may vary tremendously. For some phenomena—mostly physical—a deep trance does seem to be essential.

Trance may occur intentionally or spontaneously, and might be just a light trance or one of the deeper variety. In the lighter trance, the medium invariably has full memory after the event of all that transpired. In the deeper states, the medium has no knowledge of what took place the whole time he or she was in the altered state. Sometimes a medium is not even aware of being in trance because it is such a light one. For example, most mediums and psychics would swear they are not entranced when doing something like psychometry or simple clairvoyance, yet they have invariably slipped from the beta state into the beginnings of alpha.

Mediumistic trance can be induced hypnotically, but it is essentially different from plain hypnotic trance. When a hypnotist places a subject under hypnosis, that subject remains in rapport with the hypnotist, a living person. In a mediumistic trance, the medium loses all contact with the living and attunes to the spiritual realm, to the point where it is almost as though the spirit guide is the “hypnotist.”

Nandor Fodor described Boston medium Leonora Piper (1859–1950) as “the foremost trance medium in the history of psychical research.” She described her own trance, saying,

I feel as if something were passing over my brain, making it numb; a sensation similar to that experienced when I was etherised, only the unpleasant odour of the ether is absent. I feel a little cold, too, not very, just a little, as a cold breeze passed over me, and people and objects become smaller until they finally disappear; then, I know nothing more until I wake up, when the first thing I am conscious of is a bright, a very bright light, and then darkness, such darkness. My hands and arms begin to tingle just as one’s foot tingles after it has been “asleep,” and I see, as if from a great distance, objects and people in the room; but they are very small and very black.

Nandor Fodor said of Leonora Piper’s trance, On awakening from trance Mrs. Piper often pronounced names and fragments of sentences which appeared to have been the last impressions on her brain. After that she resumed the conversation at the point where it was broken off before she fell into trance.

In the earlier days of mediumship, the act of going into trance frequently seemed a painful one. Mediums would grimace and contort their faces and bodies, some even tearing their hair! Thankfully the process today seems much easier, with the medium slipping into unconsciousness as one slips into sleep.

a state of impaired consciousness during which automatic, seemingly sensible, and sometimes complex acts (such as walking on the street or traveling by public transportation) are performed. Acts performed during a state of trance are not recalled. Trance occurs mainly in connection with epilepsy, hysteria, and deep hypnosis. The term is also used to denote detached, ecstatic, and clairvoyant states.

Feedback
Flashcards & Bookmarks ?
Please log in or register to use Flashcards and Bookmarks. You can also log in with
Flashcards ?
My bookmarks ?
+ Add current page to bookmarks
Mentioned in ?
References in periodicals archive ?
Here, and throughout the book, Becker is generous in her acknowledgement of the work and support of other scholars, host musicians, and friends in her challenge to weave together different strands of theory and experience with respective to understanding trancing. Deep Listening: Music, Emotion, and Trancing is a single-authored book, but clearly, Becker's research processes embodied discovering and experiencing the perspectives of many groups and individuals.
In the book's introduction, Becker outlines her critical model for studying trancing. This includes consideration of multiple scientific perspectives, as well as religious, philosophical dimensions, and ideas related to articulating inner emotion and the expression of human feelings.
In "Rethinking Trance," the book's first chapter, Becker begins with acknowledging the central source (prior to her work) on music and trancing, Gilbert Rouget's La Musique et la transe: Esquisse d'une theorie generale des relations de la musique et de la possession (1980; English translation, 1985).
Deep Listeners: Music, Emotion, and Trancing