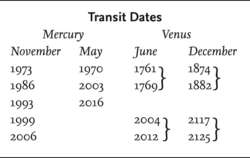 (tran -zit, -sit)
1. The passage of an inferior planet across the Sun's disk. Normally when Venus or Mercury move between the Earth and Sun, at inferior conjunction, they pass above or below the Sun. A transit can occur only when the planet is at or near one of its nodes at inferior conjunction. Transits of Mercury take place either about May 7 (descending node) or Nov. 9 (ascending node) (see table). Transits occur at intervals of 7 or 13 years or in combinations of these figures, e.g. after 33 or 46 years. The much rarer transits of Venus take place either about June 7 (descending node) or Dec. 8 (ascending node). They currently occur in pairs with a separation of 8 years, the pairs themselves being separated by 105.5 or 121.5 years.
2. The passage of a planetary satellite or its shadow across the face of the planet.
3. (upper culmination) The passage of a celestial body, during its daily path, across an observer's meridian through the point closer to the observer's zenith. See also culmination.
Collins Dictionary of Astronomy © Market House Books Ltd, 2006

Transit, from the Latin trans, meaning “across,” “beyond,” or “over” plus ire, meaning “go,” has two related astrological meanings. The first simply identifies planets that are moving across the sky, in contrast to planets positioned in a birth chart (or in other kinds of horoscopes). For example, a given individual’s natal Mercury (Mercury’s position at birth) is at 25° Aquarius, whereas transiting Mercury is moving through the early degrees of Sagittarius. One can also talk about a planet’s transit (movement) through a given sign or house.

The second meaning of transit refers to a method of predicting conditions on the basis of the interaction between transiting planets and one’s natal chart (birth chart). Secondary progressions, the other method of prognostication most in use among contemporary astrologers, entails finding a person’s age—say, 40 years—and moving the planets and house cusps of the natal chart to the positions they occupied the same number of days after birth as the individual’s age in years, in this case, 40 days. An oversimplified but nevertheless useful generalization is that transits indicate external conditions, whereas progressions indicate inner development (in the sense of changes in one’s personality). Thus, transits are used to predict future environments, and progressions are used to predict inner changes. For readings, astrologers often erect a chart that has three concentric circles; the inner circle contains the natal chart, the intermediate circle contains what is referred to as the progressed chart, and the outer circle records the positions of the transiting planets for the time of the reading. This tripartite chart allows the astrologer to view the interactions between the various levels at a glance.

The transiting planets exert generic influences that affect everybody. Thus, the period during which Mercury (which is associated with communication and concrete thinking) is retrograde (appears to move backward in its orbit), for example, is not a good time for anyone to sign contracts. However, when astrologers discuss transits, they usually have in mind the interaction between the planets currently moving through the heavens and the planets in a particular person’s natal chart. A natal chart is a bit like a two-way template that shows how a person views the universe as well as how the universe affects the individual. The positions that the planets occupied at the person’s birth, in other words, remain sensitive spots that respond to the transiting celestial bodies making aspects to them. Say, for example, that an individual’s natal Mercury (the position Mercury occupied at birth) is 10° in the sign Capricorn. Furthermore, transiting Neptune (a planet that is associated with, among many other things, delusion and foggy thinking) is moving over the person’s Mercury, while simultaneously making inharmonious aspects with other planets. For the period this transit is in effect, this individual should refrain from signing contracts. In this situation, unlike the case of retrograde Mercury, the advice is particularized for one person rather than for everybody.

The transiting planets also affect a person according to the house through which they are moving. Thus, for example, a transit of Jupiter (which embodies the principle of expansion and good luck) through the tenth house (career and public standing) would be, unless other transits dictate the contrary, a good period for a businessperson to undertake a business expansion. The length of time a transit has an effect varies according to the relative speed of the planet. Jupiter, for example, usually takes about a year to cross through an average-sized house, giving the hypothetical businessperson in this example a year to take advantage of Jupiter’s transit through her or his tenth house. By way of contrast, the Moon transits a house in 2 or 3 days, whereas Pluto takes 15 years.

[′trans·ət]
(astronomy)
A celestial body's movement across the meridian of a place. Also known as meridian transit.
Passage of a smaller celestial body across a larger one.
Passage of a satellite's shadow across the disk of its primary.
(engineering)
A surveying instrument with the telescope mounted so that it can measure horizontal and vertical angles. Also known as transit theodolite.
To reverse the direction of the telescope of a transit by rotating 180° about its horizontal axis. Also known as plunge.
(navigation)
A positive-fixing system employing low-orbit satellites which constantly emit continuous-wave signals; on the surface vehicle, the signals are received and the Doppler shift is recorded; position is determined by computation based on the shift.
McGraw-Hill Dictionary of Scientific & Technical Terms, 6E, Copyright © 2003 by The McGraw-Hill Companies, Inc. transit: a, tripod stand; b, leveling plates; f, vernier; g, compass; h, h', levels; i, vertical circle; k, telescope
A surveying instrument used for the measurement and laying out of horizontal and vertical angles, distances, directions, and differences in elevation; a type of theodolite having an alidade with a telescope which can be reversed in direction.
McGraw-Hill Dictionary of Architecture and Construction. Copyright © 2003 by McGraw-Hill Companies, Inc.

i. The passage of a celestial body across a celestial meridian.
ii. The apparent passage of a celestial body across the face of another.
iii. A condition in which an observer and two objects on the earth's surface are in one line.
iv. The passage of an aircraft through controlled airspace.
v. The act or process of passing from over or across a place, or from one place to another, as in “the airplane is in transit.”
vi. An instrument used to accurately survey an area or align aircraft during a rigging process.
An Illustrated Dictionary of Aviation Copyright © 2005 by The McGraw-Hill Companies, Inc. All rights reserved

(language)
A subsystem of ICES.