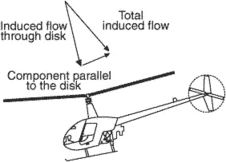 When hovering in calm conditions, a given induced flow passes at right angle to the rotor disk. In case of any wind, the induced flow perpendicular to the disk becomes smaller.

The downward vortex is beginning to dissipate and induced flow down through the rear of rotor disk is more horizontal than at hover.

At slow speeds the perpendicular flow is substantial, but as airspeed increases it lessens while the horizontal component increases. At high speeds, the horizontal flow component is very large and would only reduce if the disk inclination becomes greater.
The additional lift (or rotor thrust) obtained through air speed because of the increased efficiency of the rotor system, whether it is when transitioning from a hover into forward flight or when hovering in a wind. During a hover, the rotors are lifting in a downward-moving column of air; the lift increases as the helicopter starts moving forward out of the descending column of air it created while hovering. With an increase in forward speed to about 12 to 15 knots, the rotor becomes more efficient and produces a dramatic increase in the lift compared to while hovering.
An Illustrated Dictionary of Aviation Copyright © 2005 by The McGraw-Hill Companies, Inc. All rights reserved

Feedback
Flashcards & Bookmarks ?
Please log in or register to use Flashcards and Bookmarks. You can also log in with
Flashcards ?
My bookmarks ?
+ Add current page to bookmarks
Mentioned in ?
References in periodicals archive ?
Reading all those war books taught me some helicopter terminology, like "translational lift." Simply put, when a helo is moving slowly, the main rotor's downwash creates vortexes and general turbulence immediately around it.
Its translational lift begins at 15 knots, and there's a northeasterly, 10-knot wind.
Rotary revelations: managing helicopter operations around fixed-wing aircraft demands a little finesse and a lot of clarity on the part of pilots and controllers
With the helo pad on uneven terrain, it was clear they'd fly out of ground effect during departure--before they got much help from effective translational lift (ETL).
A rotorcraft tale: toll of a tailwind
* LT Benjamin Armstrong, USN, "Reaching Translational Lift: The History of the Helicopter and Lessons for 21st Century Technology" (http://www.airpower.maxwell.af .mil/airchronicles/cc/armstrong.html)
Selecting ASPJ focus areas and presenting the latest Chronicles Online Journal articles
"The aircraft was in what they call translational lift, meaning it had lifted off and was headed out of the helipad and then it went down.
Travel to fires a risky business
Potentially high winds, paired with a venturi effect between the ships, may have caused some weathervaning and loss of translational lift during the forward transition.
Fly or swim?
The climb began to pick up as I felt the aircraft go through translational lift. OK, things were beginning to make sense again; all was returning to normal, although painfully slow.
Helo IFR (I Follow Roads): I told my copilot I had vertigo and to stay on the instruments with me. His response was less than inspiring, "I ... I ... don't know where we ... are."
We didn't waste a single bit of forward momentum in our quest to reach translational lift before slamming back into the runway.
Skid row in Houston
I already was in an accelerating attitude, so I maintained cyclic position and cracked collective, hoping translational lift would take affect before Nr and altitude ran out.
Seahawk in afterburner
The strong winds out of the north definitely helped keep us in translational lift, and we started an air taxi.
First Time for Everything