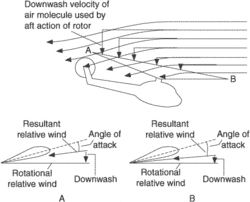 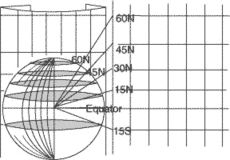 Northern Hemisphere transverse Mercator projection with the 0° Greenwich Meridian shown as the central meridian of the projection. The shaped area extended 600 NM either side of the central meridian is the central meridian is the only part of the projection that is of practical navigation use.
The unequal drag in the fore-and-aft parts of the rotor disc, which results in vibrations in most helicopters at speeds between 10 and 20 knots. In forward flight, air passing through the rear portion of the rotor disc has a greater downwash angle than air passing through the forward portion. The downward flow at the rear of the disc causes a reduced angle of attack, resulting in less lift. An increased angle of attack and more lift is produced at the front portion of the disc because airflow is more horizontal. These differences between the fore-and-aft parts of the rotor disc are called the transverse flow effect.
An Illustrated Dictionary of Aviation Copyright © 2005 by The McGraw-Hill Companies, Inc. All rights reserved