see Krebs cycleKrebs cycle,
series of chemical reactions carried out in the living cell; in most higher animals, including humans, it is essential for the oxidative metabolism of glucose and other simple sugars.
..... Click the link for more information. .
The Columbia Electronic Encyclopedia™ Copyright © 2013, Columbia University Press. Licensed from Columbia University Press. All rights reserved. www.cc.columbia.edu/cu/cup/
The following article is from The Great Soviet Encyclopedia (1979). It might be outdated or ideologically biased.

(also Krebs cycle, citric acid cycle), a pathway commonly involved in the metabolism of animals, plants, microorganisms, and fungi for the oxidative transformation of the dicarboxylic and tricarboxylic acids formed as intermediates in the breakdown of proteins, fats, and carbohydrates. The tricarboxylic acid cycle, or TCA cycle, was discovered by H. A. Krebs and W. Johnson in 1937.

Occurring in the mitochondria, the TCA cycle starts with citric acid and ends with the formation of oxaloacetic acid and CO2 and reduction of the coenzymes of the dehydrogenases nicotinamide adenine dinucleotide (NAD) and flavin adenine dinucleotide (FAD). The tricarboxylic acids acting as substrates in the TCA cycle are citric, ci’s-aconitic, isocitric, and oxalosuccinic acids; the dicarboxylic acid substrates are ketoglutaric, succinic, fumaric, malic, and oxaloacetic acids. Acetic acid should also be considered a substrate of the cycle. In its active form, that is, as acetyl coenzyme A (acetyl Co A), acetic acid figures in the condensation with oxaloacetic acid resulting in the formation of citric acid. It is the acetyl group in the structure of citric acid that undergoes oxidation. Here, the carbon atoms are oxidized to CO2; some of the hydrogen atoms are partially accepted by the dehydrogenase coenzymes, and some enter in proton form into solution, that is, into the surrounding medium.

Usually it is pyruvic acid (pyruvate), which is formed during glycolysis in transamination reactions and which occupies a central position in intersecting metabolic pathways, that is pointed to as the source material for acetyl CoA. Indeed, by the action of a polyenzymatic complex—pyruvate dehydrogenase—pyruvate is oxidized with the formation of CO2 (first decarboxylation) and acetyl CoA, and NAD is reduced (Figure 1). However, the oxidation of pyruvate is by no means the only pathway for the formation of acetyl CoA, which is a characteristic product of the mitochondrial oxidation of fatty acids (thiolase enzyme), as well as of the reverse condensation reaction of the citric acid. All the enzymes participating in the reactions of the TCA cycle are located in the mitochondria, with most of them bound firmly to membrane structures.

Citric acid, whose transformation marks the start of the TCA cycle, is formed in an endergonic reaction that proceeds by using the energy-rich bond linking the acetyl group with CoA [CH3(O)C ~ SCoA]. Subsequently, citric acid is isomerized into isocitric acid; here, cis-aconitic acid is formed as an intermediate. The product of the further transformation of isocitric acid by the action of the corresponding dehydrogenase is apparently oxalosuccinic acid, the decarboxylation of which (the second CO2 molecule) leads to α-ketoglutaric acid. The α-ketoglutaric dehydrogenase system in many ways (high molecular weight, complex multicomponent structure, stepwise reactions, and, partially, the same coenzymes) is similar to the action of the pyruvate dehydrogenase. The reaction products are CO2 (third decarboxylation), NADH ‧ H +, and succinyl CoA. In this step, succinyl CoA synthetase catalyzes the reversible reaction for the formation of free succinate: succinyl CoA + Pi + GDP ⇄ succinate + CoA + GTP. This reaction effects what is known as substrate level phosphorylation, that is, the formation of the energy-rich guano-sine triphosphate (GTP) or adenosine triphosphate (ATP) from guanosine diphosphate (GDP) and inorganic phosphate (Pi) using the energy of succinyl CoA. After the formation of succinate, the flavoprotein succinic dehydrogenase becomes active, 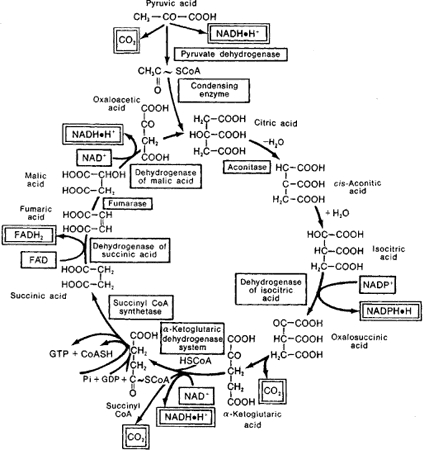 Figure 1. The tricarboxylic acid cycle. The single-ruled boxes contain the enzymes and the oxidized forms of the coenzymes; CO2 and the reduced coenzymes appear in double-ruled boxes.

leading to the formation of fumaric acid. Fumarase provides for the equilibration of fumaric acid and malic acid, while the dehy-drogenase of malic acid (coenzyme NAD+) completes the TCA cycle by forming oxaloacetic acid. In this step, the condensation (condensing enzyme) reaction between oxaloacetic acid and acetyl CoA forming citric acid is repeated.

The energy efficiency of the processes in the tricarboxylic acid cycle is low. However, the 4 moles of NADH, 1 mole of FADH2, and 3 moles of CO2 formed in the oxidation of pyruvate and succeeding reactions are important products of oxidative transformations. This is especially true of the reduced forms of NAD and FAD. The further oxidation of NAD and FAD is accomplished by the enzymes figuring in the respiratory chain and is linked to phosphorylation, that is, the formation of ATP from the esterifi-cation of inorganic phosphate. Each molecule of pyruvate completely oxidized to CO2 and H2O results in the formation of at least 15 energy-rich phosphate bonds. The oxidation of NADH and FADH2 by the enzymes in the respiratory chain is rather efficient; it occurs using atmospheric oxygen, leads to the formation of water, and serves as the major source for the cell’s energy reserves. However, the enzymes of the TCA cycle do not participate directly in this oxidation.

Feedback
Flashcards & Bookmarks ?
Please log in or register to use Flashcards and Bookmarks. You can also log in with
Flashcards ?
My bookmarks ?
+ Add current page to bookmarks
Mentioned in ?
References in periodicals archive ?
and Savageau, M.A., 1992b, "The tricarboxylic acid cycle in Dictyostelium discoideum: III.
The methionine metabolism in human liver cell: steady-state sensitivity analysis by biochemical systems theory
Once catechol is formed it appears that it is going to be cleaved by following the ortho cleavage pathway to yield cis,cis muconic acid which will subsequently gets converted in to TCA (Tricarboxylic acid cycle) intermediate to generate energy and other vital bio molecules necessary for the growth and survival of the organism.
Phenol biodegradation by Rhodococcus coprophilus isolated from semi arid soil samples of pali, Rajasthan
Acetyl-CoA, formed as a result of fatty acids oxidation, enters the tricarboxylic acid cycle and is dependent on sufficient oxaloacetate formed by carboxylation of pyruvate (the product of glycolysis).
Seasonal adaptations of moose (Alces alces) metabolism
(1) The toxin also inhibits enzymes of the tricarboxylic acid cycle. (9) Metabolism of [beta]-nitropropionic acid produces nitrites that can also result in methemoglobin formation.
Crown vetch (Coronilla varia) poisoning in a budgerigar (Melopsittacus undulatus)
He postulated that because fumaric acid is involved in the tricarboxylic acid cycle and is therefore fundamental to cellular respiration, exogenous administration of the drug would be beneficial.
Fumaric acid esters from Germany may offer help in severe psoriasis
There is no functional tricarboxylic acid cycle in these organisms and unsaturated organic acids are used as terminal electron acceptors (Saruta et al.
Selective activation of stress proteins in the muscle of the parasitic worm Ascaris suum from pig intestine
In larvae, proline is also needed for puparium formation (Hackman 1953), whereas in adults, proline may spark the tricarboxylic acid cycle during insect flight and serve as a primary energy substrate in flight muscles or adult brain (Beenakkers et al.
Differences between larval and adult Drosophila in metabolic degradation of ethanol
In the latter mechanism, increased mitochondrial NADH causes inhibition of tricarboxylic acid cycle function, resulting in the accumulation of acetyl-CoA.
Dilated Cardiomyopathy in a 2-Year-Old Infant