see magnoliamagnolia,
common name for plants of the genus Magnolia, and for the Magnoliaceae, a family of deciduous or evergreen trees and shrubs, often with showy flowers. They are principally of north temperate regions with centers of distribution in Asia and E North America.
..... Click the link for more information. .
The Columbia Electronic Encyclopedia™ Copyright © 2013, Columbia University Press. Licensed from Columbia University Press. All rights reserved. www.cc.columbia.edu/cu/cup/ 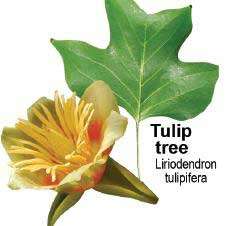 (Liriodendron tulipifera), also whitewood, a deciduous tree of the family Magnoliaceae. The trunk measures 50–60 m in height and 3–3.5 m in diameter. The lyrate leaves have four to six lobes and are notched at the apex. The large greenish yellow flowers measure 5–6 cm across and resemble tulip blossoms; they are solitary and are borne at the ends of branches. The perianth consists of three tripartite circles, and the numerous stamens and carpels are arranged in a spiral. The nutlike fruits are one- or two-seeded and winged; they are gathered in a conelike fashion on the elongate single axis.

The tulip tree is native to eastern North America. It is one of the most ornamental trees. In the USSR the tree is grown on the Black Sea Coast of the Caucasus, in the Crimea and other regions of the European USSR, and in the southern regions of Middle Asia. The wood, which is known as tulipwood or yellow poplar, is lightweight, soft, and easily worked. It is used in the production of plywood, furniture, the housing of radio receivers, the body of musical instruments, and various other wooden articles.

L. chinense, a closely related species of the tulip tree, grows in China and northern Indochina. It is less frequently cultivated than the tulip tree.

Feedback
Flashcards & Bookmarks ?
Please log in or register to use Flashcards and Bookmarks. You can also log in with
Flashcards ?
My bookmarks ?
+ Add current page to bookmarks
Mentioned in ?
References in periodicals archive ?
Larvae of tulip tree moths were hatched from 10 eggs obtained from a commercial source in 2004 (www.silkmoths.bizland.com) and raised in sleeves on local tulip trees (Liriodendron tulipifera) that summer.
The function of multiple mating by female promethea moths, callosamia promethea (drury) (lepidoptera: saturniidae)
In the low-ground section of Hemmer Woods in Gibson County, tulip tree still occurs in record sizes.
Forest communities and tree species of the Lower Wabash River basin
After Mass Reid has planted the Tulip Tree and spoken to God about Mrs.
Her stem singing: Kamau Brathwaite's Zea Mexican Diary: 7 Sept 1926 - 7 Sept 1986
de Vries, on the 15th May 1987 to commemorate the planting of the adjacent Dutch tulip tree to mark the 10th anniversary of the signing of the twinning agreement in Zutphen on the 6th May, 1977, and also to commemorate the death of Sir Philip Sidney (a pupil of Shrewsbury School) at the Battle of Zutphen on the 17th October, 1586."
Twins' special bond; FLASHBACK TO..
Popular animal shelter Brysons at Eighton Banks, in Gateshead, has welcomed the contributions from Th' Tulip Tree charity shop on Harraton Terrace, Birtley, with open arms.
Animal shelter's delight over PS40k windfall
MEMORIAL A TULIP tree has been planted in Cannock Park to commemorate the fallen of First World War.
Tree marks 100 years since WWI; MEMORIAL
Other delights include the Tulip tree, the Paper Bark Maple with its distinctive peeling bark, and the Paper-Bark Birch - another tree with peeling bark, both of which were favourites of my dad.
GREEN SCENE
Join him for this two hour tour and see a selection of the area's trees: meet 'The Monkey Puzzle Tree', the beautiful 'Tulip Tree', the largest 'Yew Tree' in south Liverpool and more.
Park life with ranger Richie; Time Off The family entertainment guide
The cemetery has a carved tulip tree, in memory of the four trees in the Remembrance Garden which never survived, owing to the very poor soil and lack of care.
Splendid tree plans; Your say
THE framework to a great garden is its trees, and at Plas Newydd the house is surrounded on three sides by woodland or parkland strewn with large specimen trees, including red oak, tulip tree, cedar of Lebanon and walnut.
Land of giants; TTRREEEESS FFOORRMM TTHHEE FFRRAAMMEEWWOORRKK TTOO AA GGRREEAATT LLAANNDDSSCCAAPPEE,, SSAAYYSS PPLLAASS NNEEWWYYDDDD HHEEAADD GGAARRDDEENNEERR PPAAUULL OO''BBYYRRNNEE
The Priests House is famous with people with a fondness for horticulture thanks to the centruries old tulip tree that stands at the front of the house.
An a-maze-ing property; AlisonJones explores The Priests House, a charming property full of character andcharm throughout
Sheath of the milkweed, sheath of green-gold the tulip tree leaves
Sheath