see diodediode
, two-terminal electronic device that permits current flow predominantly in only one direction. Most diodes are semiconductor devices; diode electron tubes are now used only for a few specialized applications.
..... Click the link for more information. .
The Columbia Electronic Encyclopedia™ Copyright © 2013, Columbia University Press. Licensed from Columbia University Press. All rights reserved. www.cc.columbia.edu/cu/cup/
The following article is from The Great Soviet Encyclopedia (1979). It might be outdated or ideologically biased.

(or Esaki diode), a two-terminal semiconductor electron device in which there exists an extremely thin potential barrier to electron flow (seeSEMICONDUCTOR DIODE).

The transport characteristic (the volt-ampere curve) of a tunnel diode is governed primarily by the quantum-mechanical tunneling process, which permits electrons to penetrate from one allowed energy region to the other through the barrier. The discovery of the tunnel diode in 1957 by L. Esaki provided the first convincing demonstration of electron tunneling in solids. 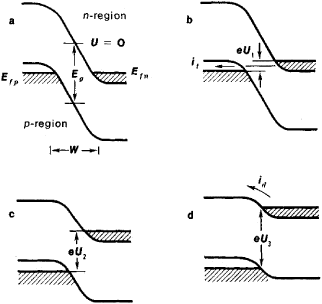 obtaining of semiconductor materials with sufficiently well-defined electronic properties. By doping the semiconductor with large amounts of the appropriate impurities, Esaki succeeded in making the densities of holes and electrons in the p- and n-regions, respectively, extremely high while maintaining an abrupt transition from one region to the other. If the width of the junction is very small (50–150 angstroms) and the concentration of doping agents is sufficiently high, the current through the tunnel diode is dominated by electron tunneling.

Figure 1 shows simplified energy diagrams for such p-n junctions at four different bias voltages U. As the bias is increased to the voltage U1, the interband tunnel current (it, in Figure 1,b) increases. With a further increase in the applied voltage to, say, U2 (Figure 1,c), the conduction band in the n-region becomes uncrossed with the valence band in the p-region, and the current decreases because of the lack of allowed states of corresponding energies for tunneling. In this region of the volt-ampere characteristic, the tunnel diode exhibits a negative resistance. When the voltage reaches or exceeds U3 (Figure l,d), the normal diffusion (or thermal) current dominates, as in the case of the usual p-n diode.

The first tunnel diode, which was constructed in 1957, was made of Ge. Several other semiconductor materials, however, were soon found to be suitable for obtaining tunnel diodes. Such materials include Si, InSb, GaAs, InAs, PbTe, GaSb, and SiC. Figure 2 gives the volt-ampere characteristics for tunnel diodes made from some of these materials. 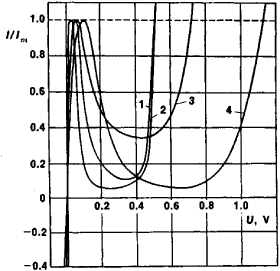 Since the tunnel diode exhibits a differential negative resistance with a rapid response, it is capable of serving as an active element for amplification, oscillation, and switching in electronic circuits at high frequencies.

[′tən·əl ‚dī‚ōd]
(electronics)
A heavily doped junction diode that has a negative resistance at very low voltage in the forward bias direction, due to quantum-mechanical tunneling, and a short circuit in the negative bias direction. Also known as Esaki tunnel diode.
McGraw-Hill Dictionary of Scientific & Technical Terms, 6E, Copyright © 2003 by The McGraw-Hill Companies, Inc.

Feedback
Flashcards & Bookmarks ?
Please log in or register to use Flashcards and Bookmarks. You can also log in with
Flashcards ?
My bookmarks ?
+ Add current page to bookmarks
Mentioned in ?
References in periodicals archive ?
These stages have been devised to monitor the bias point voltages at the input of HEMT and the tunnel diode and, based upon them, are used to maintain the bias voltages for the tunnel diode and HEMT to remain in the optimal region of their operation.
For calibration of power supplies, as well as for calibrating and monitoring the operating points of the tunnel diode and LNA, a precision voltage source made around MAX6126 and a Digital Multimeter (Keithley 2112) were deemed as the best method.
The particular tunnel diode device, with which these results were obtained, was a GE 1N3713 device operated around an optimal bias point of 139 mV [+ or -] 7 mV, in conjunction with two parallel SMV1405 varactor diodes.
Weischedel, General Electric Tunnel Diode Manual, General Electric Company, Liverpool, NY, USA, 1961.
An Experiment and Detection Scheme for Cavity-Based Light Cold Dark Matter Particle Searches
Esaki tunnel diodes, discovered in 1957 and the first quantum devices, were used to create a map showing output tunnel currents for a given set of material systems and parameters.
Next generation batteries may last 10 times longer than today's
Tunnel diodes may be used for detection to reduce the effect of variations with temperature.
A VSWR METER USING A POWER SENSING TERMINATION