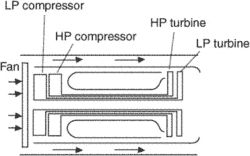 A type of gas turbine engine that has a fan or a set of lengthened blades either on a low-pressure compressor or a low-pressure turbine. The term also applies to a less common arrangement in which the fan is located at the rear of the engine and is an external extension of one or more turbines. In some axial-flow engines, the airflow through the compressor is in the forward direction, parallel to the axis of the rotor. This is known as a reverse-flow turbofan-type engine. Air moved by the fan blades propels bypass air flows along the engine axis but between the inner-and outer-engine casing. This air is not combusted but does provide additional thrust caused by the propulsive effect imparted to it by the extended compressor blading. Fan air is responsible for production of 25 to 75% of the thrust produced by the engine.
An Illustrated Dictionary of Aviation Copyright © 2005 by The McGraw-Hill Companies, Inc. All rights reserved

Feedback
Flashcards & Bookmarks ?
Please log in or register to use Flashcards and Bookmarks. You can also log in with
Flashcards ?
My bookmarks ?
+ Add current page to bookmarks
Mentioned in ?
References in periodicals archive ?
The Global Commercial Aircraft Turbofan engines market has been in the super-cruise mode propelled by one of the longest aviation super-cycle being driven by strong tailwinds with strong demand drivers and favorable macroeconomic factors.
Global Commercial Aircraft Turbofan Engines Market 2019-2038 - Market Dynamics, Competitive Landscape, Engine OEM Strategies & Plans, Trends & Growth Opportunities, Market Outlook
This was done to generate engine test data in order to investigate the feasibility of altitude scaling testing of ice crystal icing in a turbofan engine environment.
Ice crystal icing engine testing in the NASA Glenn Research Center's propulsion systems laboratory: Altitude investigation
The radial-axial flow turbofan engine is characterized by inlet of the primary flow because has a different position, a radial direction of flow and different geometry than the inlet for the secondary flow, so that the air flow Ma.I from the primary flow represents the air flow aspirated by the LPC and the air flow [M.sub.a.F] from the secondary flow is the air flow aspirated by the FAN.
Detailed gas dynamic study of performances for two types turbofan configurations
After reading my GTF article, Fred Borns of Phoenix-based Honeywell, emailed to remind me that his company had been developing and producing geared turbofan engines for several decades.
Gears galore!
The Geared Turbofan engine will be a product unique in the aircraft industry, bringing double-digit reductions in fuel burn, environmental emissions, engine noise and operating costs, Volvo said.
Volvo Aero enters Pratt & Whitney's Geared Turbofan engine programme
Combining Honda's original small turbofan engine technology and GE's sixty years of experience in the development and manufacture of jet engines, the GE Honda HF120 is the most fuel efficient engine in its class; and while there are currently no emission regulations for small turbofan engines, the HF120 is expected to surpass the future anticipated emissions standards by as much as 20 percent.
Honda Aero, Inc. to Build Headquarters and Manufacturing Plant to Produce Turbofan Jet Engines in Burlington, North Carolina
A range of aircraft diesels along with the emerging new market for very light jet aircraft (VLJs) and related new small turbofan engines expected on the market next year were reviewed at the recent Experimental Aircraft Association Air Venture in Oshkosh, Wis.
Market looking up for aircraft diesels?
The turbofan engine incorporates a gearbox to enable the optimum combination of low rotor speed of the fan and high rotor speed for engine core components.
Next generation of transport Engines--very high bypass ratio turbofans vs open rotor engines
PRATT & WHITNEY has revealed highly encouraging flight test results of its patented geared turbofan engine.
P&W hails turbofan as 'an aviation leap': PurePower PWI1000G geared turbofan engine moves to detailed design after 'encouraging' test performance
Last December, the company developed a light business jet equipped with its proprietary HF118 turbofan engine and began test flights.
Honda sets up U.S. unit to promote aircraft engine business
M2 EQUITYBITES-February 8, 2018-Pratt & Whitney Turbofan engine to power BOC A320neo family aircraft
Pratt & Whitney Turbofan engine to power BOC A320neo family aircraft
(NYSE: UTX), has highlighted a number of achievements related to its turbofan engine families that demonstrate the company's leadership in the business jet sector, the company said.
Pratt & Whitney Canada reports engine achievements