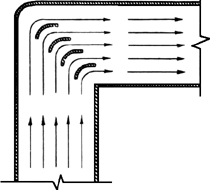 turning vanes
One of a number of curved fins which are placed in air-conditioning ductwork at a point where the duct changes direction; used to promote a more uniform airflow and to reduce pressure drop.
McGraw-Hill Dictionary of Architecture and Construction. Copyright © 2003 by McGraw-Hill Companies, Inc.

Feedback
Flashcards & Bookmarks ?
Please log in or register to use Flashcards and Bookmarks. You can also log in with
Flashcards ?
My bookmarks ?
+ Add current page to bookmarks
Mentioned in ?
References in periodicals archive ?
It not only acts as a fuel tank but as a turning vane to move the air out and to the top of the module."
A new experience in gen-sets: EPG new player in power generation business with more than 30 years' experience; 800 to 2000 kW generators with trapezoidal fuel tanks
The company carried out the work on behalf of its direct customer, aero-engine test-cell and noise control specialists Cullum Detuner of Heanor, Derbyshire, which designed and constructed the turning vane assemblies on behalf of Rolls-Royce.
Rolls-Royce service
Remarkably, Schumacher had cracked a turning vane relating to the aerodynamics of his car on his initial outlap, which forced the Ferrari mechanics into a quick change on the grid ahead of the formation lap.
Formula One: Schumacher rewrites history
The judges ruled that the barge board turning vane was legal after race stewards in Malaysia had said the aerodynamic part was 10mm too small.
Motor Racing : Ferrari revved up for head to head; COURT PAVES WAY FOR EDDIE TO BECOME KING
The five appeal judges, who heard four hours of evidence from Ferrari, McLaren and Stewart-Ford at the Automobile Club de France in Paris, ruled that the barge board turning vane at the centre of the row was legal.
MOTOR RACING: EDDIE READY TO BE F1 KING; Appeal win means his championship dream's back on!
The five appeal judges, who heard four hours of evidence, ruled that the barge board turning vane on the Ferraris was legal.
MOTOR RACING: GP BOSSES WANT FERRARI TO WIN TITLE SAYS JOHN BARNARD FORMER FERRARI DESIGNER
''I can't say what happened to the turning vane on the side of the car which helps air flow, but I know the team accept it was millimetres short of the minimum requirement.
Irvine pleads for 'fair play' by FIA court; FORMULA ONE: WORLD TITLE HANGS IN THE BALANCE
The turning vane cascades in each of the four 90-degree elbows of the circuit are made up of segments of airfoil-shaped vanes.
Testing ship designs in a water tunnel