A process in which two or more crystals, or parts of crystals, assume orientations such that one may be brought to coincidence with the other by reflection across a plane or by rotation about an axis. Crystal twins represent a particularly symmetric kind of grain boundary; however, the energy of the twin boundary is much lower than that of the general grain boundary because some of the atoms in the twin interface are in the correct positions relative to each other. See Grain boundaries

the formation in a single crystal of regions of regularly changed orientation of the crystal structure. The structures of twin formations are either mirror images of the atomic structure of the parent crystal (matrix) in a certain plane (the twinning plane) or are formed by rotation of the matrix structure about the crystallographic axis (twinning axis) to an angle that is constant for a given material or by other symmetry transformations. The pair made up of the matrix and the twin formation is called the twin.

Twinning takes place during crystal growth because of violations in the packing of atoms during the growth of the atom layer on the nucleus or on the formed crystal (stacking faults) and the intergrowth of neighboring nuclei (growth twins; see Figure l). It also takes place because of deformation upon mechanical action on the crystal, such as the impact of an indentor, tension, compression, twisting, bending (mechanical twins); rapid thermal expansion and contraction; heating of deformed crystals (recrystallization twins); and transition from one crystal modification to another.

In metals, the shift of a part or of the entire crystal into the twin position is accomplished by the layered glide of the atomic planes. Each plane is successively displaced by a fraction of the interatomic distance, in which case all the atoms in the twinning region are displaced by a distance proportional to their distance from the twinning plane (plane of regular reflection). In other crystals this process is more complex—for example, for calcite, CaCO3, rotation of the CO3 groups also occurs. Mechanical twins are formed when deformation by glide in the direction of the applied force is inhibited.

Twinning may be accompanied by changes in the dimensions and shape of the crystal; this is characteristic, for example, of CaCO3. Twinning of CaCO3 may also be achieved by the pressure of a blade (see Figure 2), in which case the region of the right-hand part of the crystal shifts to the twin position. Twinning accompanied by a change in shape is observed in all metals, semiconductors (such as germanium and silicon), and many other dielectrics. Another form of twinning, which is not accompanied by changes in shape, is observed in such substances as quartz and tri-glycine sulfate.

Figure 2. Twinning of calcite by the pressure of a blade (Baumhauer’s method)

If the structural homogeneity of a single crystal is disrupted by a great number of twin formations, the crystal is called a polysynthetic twin (Figure 3). In ferroelectrics, twinning 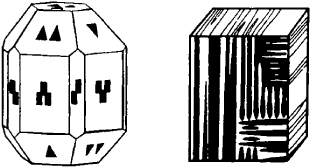 formations are also ferroelectric domains, which are, however, characterized by different optical properties (Figure 4). 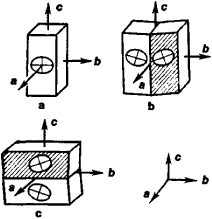 Figure 4. Diagram of the position of the optical indicatrix: (a) in a rhombic crystal of Rochelle salt; (b) and (c) in the components of a twin that are stretched along the axes c and b) of a monoclinic crystal

Twinning strongly affects the mechanical properties of crystals, such as strength, plasticity, and brittleness, as well as their electrical, magnetic, and optical properties. It also reduces the quality of semiconductor devices.

The principles of mechanical crystal twinning are used in geology in the diagnosis of minerals and for determining the conditions of rock formation. The distribution of twinned crystal layers in rock-forming minerals makes it possible to characterize the influences to which the rock was subjected. Mechanical twinning is taken into account by geologists and petrographers during analysis of the flow of rock after deformation.

[′twin·iŋ]
(crystallography)
The development of a twin crystal by growth, translation, or gliding.
McGraw-Hill Dictionary of Scientific & Technical Terms, 6E, Copyright © 2003 by The McGraw-Hill Companies, Inc.

(storage)
Keeping a mirror of a magnetic tape.
This article is provided by FOLDOC - Free Online Dictionary of Computing (foldoc.org)

Feedback
Flashcards & Bookmarks ?
Please log in or register to use Flashcards and Bookmarks. You can also log in with
Flashcards ?
My bookmarks ?
+ Add current page to bookmarks
Mentioned in ?
References in periodicals archive ?
This meeting will be a follow-up to evaluate the process, make recommendations for future activities and to continue the process and benefits of twinning.
Twinning U.S. and African AIDS Organizations: NMAC Training in U.S. Cities
Corey, who also directs the Virginia state twin registry, says researchers are only beginning to do detailed comparisons of twins' genetic material to look for the mechanism of twinning.
New theory on the origin of twins
In the United States alone, Orientals have the lowest frequency of fraternal twinning at about one in 140 births.
Twin facts - twin facts
(1) Though it can occur in dizygotic gestation most commonly seen in monozygotic twinning. Placental vascular anastomosis, artery to artery is the essential underlying factor resulting in recipient and donor twins.
Acardiac acephalic twin gestation