invisible electromagnetic radiationelectromagnetic radiation,
energy radiated in the form of a wave as a result of the motion of electric charges. A moving charge gives rise to a magnetic field, and if the motion is changing (accelerated), then the magnetic field varies and in turn produces an electric field.
..... Click the link for more information.  between visible violet light and X rays; it ranges in wavelength from about 400 to 4 nanometers and in frequency from about 1015 to 1017 hertz. It is a component (less than 5%) of the sun's radiation and is also produced artificially in arc lamps, e.g., in the mercury arc lamp.

The ultraviolet radiation in sunlight is divided into three bands: UVA (320–400 nanometers), which can cause skin damage and may cause melanomatous skin cancerskin cancer,
malignant tumor of the skin. The most common types of skin cancer are basal cell carcinoma, squamous cell carcinoma, and melanoma. Rarer forms include mycosis fungoides (a type of lymphoma) and Kaposi's sarcoma.
..... Click the link for more information. ; UVB (280–320 nanometers), stronger radiation that increases in the summer and is a common cause of sunburnsunburn,
inflammation of the skin caused by actinic rays from the sun or artificial sources. Moderate exposure to ultraviolet radiation is followed by a red blush, but severe exposure may result in blisters, pain, and constitutional symptoms.
..... Click the link for more information.  and most common skin cancer; and UVC (below 280 nanometers), the strongest and potentially most harmful form. Much UVB and most UVC radiation is absorbed by the ozone layerozone layer
or ozonosphere,
region of the stratosphere containing relatively high concentrations of ozone, located at altitudes of 12–30 mi (19–48 km) above the earth's surface.
..... Click the link for more information.  of the atmosphere before it can reach the earth's surface; the depletion of this layer is increasing the amount of ultraviolet radiation that can pass through it. The radiation that does pass through is largely absorbed by ordinary window glass or impurities in the air (e.g., water, dust, and smoke) or is screened by clothing.

A small amount of sunlight is necessary for good health. Vitamin D is produced by the action of ultraviolet radiation on ergosterol, a substance present in the human skin and in some lower organisms (e.g., yeast), and treatment or prevention of ricketsrickets
or rachitis
, bone disease caused by a deficiency of vitamin D or calcium. Essential in regulating calcium and phosphorus absorption by the body, vitamin D can be formed in the skin by ultraviolet rays contained in sunlight; it can also be consumed in such
..... Click the link for more information.  often includes exposure of the body to natural or artificial ultraviolet light. The radiation also kills germs; it is widely used to sterilize rooms, exposed body tissues, blood plasma, and vaccines.

Ultraviolet radiation can be detected by the fluorescencefluorescence
, luminescence in which light of a visible color is emitted from a substance under stimulation or excitation by light or other forms of electromagnetic radiation or by certain other means.
..... Click the link for more information.  it induces in certain substances. It may also be detected by its photographic and ionizing effects. The long-wavelength, "soft" ultraviolet radiation, lying just outside the visible spectrum, is often referred to as black light; low intensity sources of this radiation are often used in mineral prospecting and in conjunction with bright-colored fluorescent pigments to produce unusual lighting effects.

Electromagnetic radiation in the wavelength range 4–400 nanometers. The ultraviolet region begins at the short wavelength (violet) limit of visibility and extends to the wavelength of long x-rays. It is loosely divided into the near (400–300 nm), far (300–200 nm), and extreme (below 200 nm) ultraviolet regions (see illustration). In the extreme ultraviolet, strong absorption of the radiation by air requires the use of evacuated apparatus; hence this region is called the vacuum ultraviolet. Important phenomena associated with ultraviolet radiation include biological effects and applications, the generation of fluorescence, and chemical analysis through characteristic absorption or fluorescence. 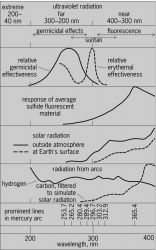 Electromagnetic radiation lying in the wavelength range beyond the Earth's atmospheric absorption at about 320 nm to the hydrogen Lyman limit at 91.2 nm (see hydrogen spectrum). The gap between the X-ray and UV wavebands is the XUV region. Long-wavelength ultraviolet radiation, i.e. with wavelengths up to 350 nm, near that of light, is often called near-ultraviolet with far-ultraviolet (FUV) being applied to short wavelengths, i.e. 91.2 nm up to about 200 nm.
Collins Dictionary of Astronomy © Market House Books Ltd, 2006
The following article is from The Great Soviet Encyclopedia (1979). It might be outdated or ideologically biased.

(also UV radiation, ultraviolet light), invisible electromagnetic radiation that occupies the spectral region between visible light and X rays, which corresponds to the wavelength (λ) range 400-10 nanometers (nm). The ultraviolet region is divided into the near-ultraviolet (400-200 nm) and the far-, or vacuum-, ultraviolet (200-10 nm) regions; the vacuum ultraviolet is so called because the ultraviolet radiation in this region is strongly absorbed by air and is studied with evacuated spectroscopic instruments.

Depending on the nature of the ultraviolet radiation source, an ultraviolet spectrum may be a line, continuous, or band spectrum (seeSPECTRUM, OPTICAL). The ultraviolet radiation from atoms, ions, or light molecules, such as H2, has a line spectrum. Spectra of heavy molecules are characterized by bands attributable to electronic-vibrational-rotational transitions of the molecules (seeMOLECULAR SPECTRA). A continuous spectrum results from the deceleration or recombination of electrons (see).

Optical properties of matter. The optical properties of substances in the ultraviolet region of the spectrum differ considerably from their optical properties in the visible region. A characteristic difference is a decrease in the transmittance, or an increase in the absorptance, of most solids that are transparent in the visible region. For example, ordinary glass is opaque at λ < 320 nm; at shorter wavelengths, only uviol glass, sapphire, magnesium fluoride, quartz, fluorite, lithium fluoride, and certain other substances are transparent. Among solids, lithium fluoride has the farthest transmission cutoff, namely, 105 nm. For λ < 105 nm, practically no material is transparent.

The most transparent gaseous substances are the inert gases; their transmission cutoff is determined by their ionization’poten-tial. Helium has the shortest-wavelength transmission cutoff, namely, 50.4 nm. Air is practically opaque at λ < 185 nm because of absorption by oxygen. 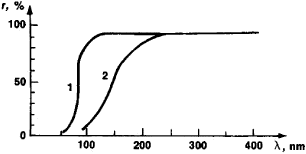 Figure 1. Plot of the reflection coefficient r of an aluminum layer against wavelength λ: (1) measured Immediately after ultrahigh-vacuum deposition, (2) measured after the layer was kept in the open air for a year

A special type of photomultiplier, called the channel multiplier, has also been developed; this device is used to construct microchannel plates. Each stage in a microchannel plate is a channel multiplier with a maximum of 10 micrometers. MicroChannel plates make it possible to obtain a photoelectric display of ultraviolet radiation and to combine the advantages of the photographic and photoelectric methods of radiation detection.

Meyer, A., and E. Seitz. Ul’trafioletovoe izluchenie. Moscow, 1952. (Translated from German.)
Lazarev, D. N. Ul’trafioletovaia radiatsüa i ee primenenie. Leningrad-Moscow, 1950.
Samson, J. A. R. Techniques of Vacuum Ultraviolet Spectroscopy. New York-London-Sydney [1967].
Zaidel’, A. N., and E. Ia. Shreider. Spektroskopiia vakuumnogo ul’trafioleta. Moscow, 1967.
Stoliarov, K. P. Khimicheskii analiz v ul’trafioletovykh luchakh. Moscow-Leningrad, 1965.
Baker, A., and D. Betteridge. Fotoelektronnaiaspektroskopiia. Moscow, 1975. (Translated from English.) A. N. RIABTSEV
Biological effects of ultraviolet radiation. The effects of ultraviolet radiation on living organisms are associated with the absorption of the radiation by the outer layers of plant tissues or of human and animal skin. Chemical changes in biopolymer molecules are the basis for the biological effects of ultraviolet radiation. Such changes result both from the direct absorption of photons by the molecules and, to a lesser extent, from the radicals of water and other compounds of low molecular weight that form during irradiation. 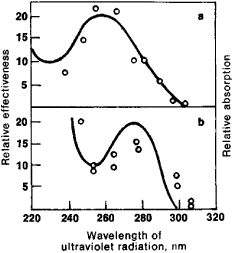 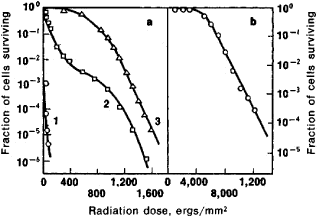 [¦əl·trə′vī·lət ‚rād·ē′ā·shən]
(electromagnetism)
Electromagnetic radiation in the wavelength range 4-400 nanometers; this range begins at the short-wavelength limit of visible light and overlaps the wavelengths of long x-rays (some scientists place the lower limit at higher values, up to 40 nanometers). Also known as ultraviolet light.
McGraw-Hill Dictionary of Scientific & Technical Terms, 6E, Copyright © 2003 by The McGraw-Hill Companies, Inc.

Electromagnetic radiation at wavelengths immediately below the visible spectrum, i.e., within the wavelength range 10 to 380 nm. May be classified as: far ultraviolet, 10 to 280 nm; middle ultraviolet, 280 to 315 nm; near ultraviolet, 315 to 380 nm. Also may be classified as: ozone-producing, 180 to 220 nm; germicidal, 220 to 300 nm; erythemal, 280 to 320 nm; black light, 320 to 400 nm. In either method of classification, there are no sharp demarcations between the wavelength bands.
McGraw-Hill Dictionary of Architecture and Construction. Copyright © 2003 by McGraw-Hill Companies, Inc.

Feedback
Flashcards & Bookmarks ?
Please log in or register to use Flashcards and Bookmarks. You can also log in with
Flashcards ?
My bookmarks ?
+ Add current page to bookmarks
Mentioned in ?
References in periodicals archive ?
Clothes with a loose weave can allow a lot of ultraviolet radiation to pass through, Weinstock says.
Having fun should include protection from the sun
It plans to ask European bodies responsible for drawing up harmonised European standards to impose limits on ultraviolet radiation given off by tanning devices.
HEALTH PROTECTION : COMMISSION KEEN TO LIMIT ULTRAVIOLET RADIATION FROM SUNBEDS
The short-term results of overexposure to ultraviolet radiation are sunburn and tanning; long-term exposure can cause prematurely aged skin and skin cancer.
Smart way to avoid cancer
"Our results are the first to provide physical evidence suggesting that lutein and zeaxanthin decrease damage caused by ultraviolet radiation."
Eat greens for good eyes
In this method, ultraviolet radiation is used to assist the attachment of alcohols to the hydrogen-terminated Si(111) surface to successfully from molecular monolayers.
NIST helps develop new method to attach long-chain aliphatic molecules to silicon
Ultraviolet radiation, the invisible portion of sunlight, occurs in three types: A, B, and C.
Sad to the bone: sun deprivation places residents in jeopardy. Some facts on remedying the problem. (Feature Article)
The most significant hazard is ultraviolet radiation (UVR).
Summertime fun, sun & cataracts. (Better Vision News: Advertising Feature)
Effects of Ultraviolet Radiation on Drosophila melanogaster Larval and Pupal Development.
Effects of Ultraviolet Radiation on Drosophila melanogaster Larval and Pupal Development. (Zoology)
Designed by Toronto-based Earth Tech Canada Inc., the expanded Bare Point plant would include direct filtration and ultraviolet radiation. Water would be drawn from Lake Superior and distributed through a system with a design capacity of 120,000.
Infrastructure upgrades underway
In an analysis of the secondary ecological repercussions, scientists from Oregon State University, Corvallis, and the British Antarctic Survey have outlined some of the residual effects of ozone depletion, acid rain, and increased levels of harmful ultraviolet radiation.
Collision with Earth Would Be Devastating
Ultraviolet radiation damages skin by causing mutations and damaging collagen.
Solar power zaps
Sunscreen works by blocking the ultraviolet radiation (UVA and UVB rays), which can cause sunburn and skin cancer, given off by the sun.
Avoiding the Burn