Under spell | Article about under spell by The Free Dictionary
https://encyclopedia2.thefreedictionary.com/under+spell
Printer Friendly

word, formula, or incantationincantation,
set formula, spoken or sung, for the purpose of working magic. An incantation is normally an invocation to beneficent supernatural spirits for aid, protection, or inspiration. It may also serve as a charm or spell to ward off the effects of evil spirits.
..... Click the link for more information.  believed to have magical powers. The spell can be used for evil or good ends; if evil, it is a technique of sorcery. Many authorities believe that the spell was the precursor of prayer. In Teutonic lore, the spell was a form of exercising occult power and was sometimes used to summon the spirits of departed heroes to give prophetic utterances. Once cast, the spell was supposed to remain in force until broken by a counterspell or exorcism.
The Columbia Electronic Encyclopedia™ Copyright © 2013, Columbia University Press. Licensed from Columbia University Press. All rights reserved. www.cc.columbia.edu/cu/cup/ 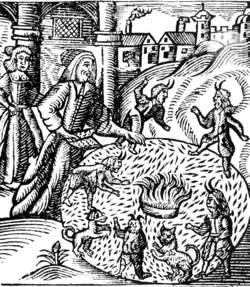 A witch conjuring demons, along with a demonic cat and dog, in order to divine the future, 1688. Courtesy Fortean Picture Library.

A spell is part of an act of magic, the essence of the actual working of the magic. While magic itself is causing something to happen that you want to happen, a spell is the ritual act of bringing about the desired result.

A ritual is made up of "things said" (legomena) and "things done" (dromena). A spell is usually the legomena of the ritual. Important to a spell are rhythm and rhyme. Many spells are chanted, or even sung, and they have a regular beat to them, usually with the words rhyming. This is to bring about a trance-like state in the practitioner, aiding in the visualization of the goal and helping build the power needed to project to that goal.

Not all spells rhyme, however. Prayers are actually spells. They are desires directed to deity, with thoughts aimed toward the accomplishment of the desire. Prayers are usually made up of words coming directly from the heart, with little thought of rhyming what is said. The feeling expressed is powerful and compensates for the lack of rhyme. Prayers are the least dynamic of spells yet can still be surprisingly effective.

In Wicca, spells are usually cast from within the ritual Circle. This is to protect the spell caster from any negative feedback. Witches may not perform negative magic, but binding spells are generally viewed as being in a "gray area," where the person at whom the spell is directed is neither helped nor harmed. Binding spells are used when it is deemed necessary to stop someone from talking (especially from giving away Craft or magical secrets). Most such binding spells involve the use of a poppet to represent the recipient, although they can be done with no more than a photograph or even a brief example of the person's handwriting. If a poppet is used, it may be of wax, cloth, clay, or similar material. No physical harm comes to the person, but he or she is restricted in words and/or actions regarding the object of the rite.

incantation
This article is provided by FOLDOC - Free Online Dictionary of Computing (foldoc.org)