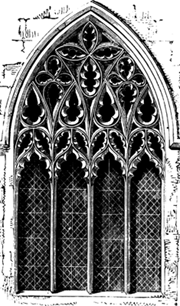 Feedback
Flashcards & Bookmarks ?
Please log in or register to use Flashcards and Bookmarks. You can also log in with
Flashcards ?
My bookmarks ?
+ Add current page to bookmarks
Mentioned in ?
References in periodicals archive ?
Undulating tracery on the little arches, and the corbels and valances in the living room add grace to the space.
19th-century home is an authentic museum-without a single fake