universal time (UT), the international time standard common to every place in the world, it nominally reflects the mean solar time along the earth's prime meridian (renumbered to equate to civil time). In 1884, under international agreement, the prime meridian was established as running through the Royal Observatory in Greenwich, England, setting the standard of Greenwich mean time (GMT). In keeping with tradition, the start of a solar day occurred at noon. In 1925 the numbering system for GMT was changed so that the day began at midnight to make it consistent with the civil day. Some confusion in terminology resulted, however, and in 1928 the International Astronomical Union (IAU) changed the designation of the standard time of the prime meridian to universal time. In 1955 the IAU defined several kinds of UT. The initial values of universal time obtained at 75 observatories, denoted UT0, differ slightly because of polar motion. By adding a correction each observatory converts UT0 into UT1, which gives the Earth's rotational position in space. An empirical correction to take account of annual changes in the speed of rotation is then added to convert UT1 to UT2. However, UT2 has since been superseded by atomic time (time as given by atomic clocks). Universal time is also called world time, Z time, and Zulu time.

In 1964 a new timescale, called coordinated universal time (UTC), was internationally adopted. UTC is more uniform and more accurate than the UT2 system because the UTC second is based on atomic time (although the UTC year is still based on the time it takes the earth to complete one orbit). Because the rate of the earth's rotation is gradually slowing, it is occasionally necessary to add an extra second, called the leap second, to the length of the UTC year; synchronization is obtained by making the last minute of June or December contain 61 seconds. About one leap second per year has been inserted since 1972.

(UT) The precise measure of time that forms the basis for all civil timekeeping. It conforms closely to the mean diurnal motion of the Sun.

UT is defined by a mathematical formula relating UT to sidereal time. It is thus determined from observations of the diurnal motions of stars. It is not a uniform timescale, however, due to variations in the Earth's rotation. The timescale determined directly from stellar observations is dependent on the place of observation, and is designated UT0. The timescale independent of location is obtained by correcting UT0 for the variation in the observer's meridian that arises from the irregular varying motion of the Earth's geographical poles; it is designated UT1. This is the timescale used by astronomers. It is counted from 0 hours at midnight, and the unit is the mean solar day.

Coordinated universal time (UTC) is based on International Atomic Time (TAI). Since Jan. 1 1972 the time given by broadcast time signals has been UTC. UTC differs from TAI by an integral number of seconds. UTC is kept within 0.90 seconds of UT1 by the insertion (or deletion) of exactly one second when necessary, usually at the end of December or June; these step adjustments are termed leap seconds. An approximation (DUT1) to the value of UT1 minus UTC is transmitted in code on broadcast time signals. TAI and UTC are recommended for the precise dating of observations. See also dynamical time. 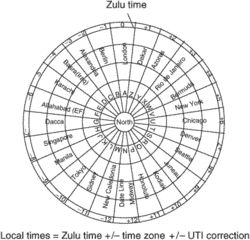 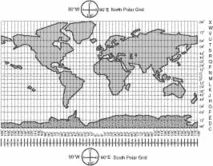 A measure of time that conforms, within a close approximation, to the mean diurnal rotation of the earth and serves as the basis of civil timekeeping. Universal Time is based on mean sidereal time as measured in Greenwich. It is approximately equal to the mean solar time from Greenwich. Like most astronomical calculations, eclipse predictions are usually presented in terms of Universal Time. To convert UT into local time, one has to know what zone he or she is in and apply a zonal correction to the UT. The UTC, or Coordinated Universal Time, is synchronized and adjusted to stay within 0.9 s of UT.
An Illustrated Dictionary of Aviation Copyright © 2005 by The McGraw-Hill Companies, Inc. All rights reserved

(time, standard)
(UT) The mean solar time along the prime meridian (0 longitude) that runs through the Greenwich Observatory outside of London, UK, where the current system originated. UT is tied to the rotation of the Earth in respect to the fictitious "mean Sun".

Greenwich Mean Time (GMT) was measured from Greenwich mean midday until 1925 when the reference point was changed from noon to midnight and the name changed to "Universal Time".

There are three separate definitions, UT0, UT1, and UT2, depending on which corrections have been applied to the Earth's motion. Coordinated Universal Time is kept within 0.9 seconds of UT1, by addition of leap seconds to International Atomic Time.
This article is provided by FOLDOC - Free Online Dictionary of Computing (foldoc.org)

(Coordinated Universal Time, Temps Universel Coordonné) The international time standard (formerly Greenwich Mean Time, or GMT). Zero hours UTC is midnight in Greenwich, England, which is located at 0 degrees longitude. Everything east of Greenwich (up to 180 degrees) is later in time; everything west is earlier. There are 42 time authorities around the world that are constantly synchronizing with each other. In the U.S., the time authorities are located at the U.S. Naval Observatory (USNO) and the National Institute of Standards & Technology (NIST). See NTP.
Copyright © 1981-2019 by The Computer Language Company Inc. All Rights reserved. THIS DEFINITION IS FOR PERSONAL USE ONLY. All other reproduction is strictly prohibited without permission from the publisher.

Feedback
Flashcards & Bookmarks ?
Please log in or register to use Flashcards and Bookmarks. You can also log in with
Flashcards ?
My bookmarks ?
+ Add current page to bookmarks
Mentioned in ?
References in periodicals archive ?
Considering that Barrows is devoted to showing the implausibility of reducing modernist temporal politics to an opposition between universal time and subjective time, it is curious that his conclusion asserts that time in postmodern texts can be reduced to an opposition between "the body and the state"(161).
Barrows, Adam. The Cosmic Time of Empire: Modern Britain and World Literature
The following sequence of events is for Eastern Daylight Time (subtract 3 hours for Pacific Time, add 4 hours for Greenwich or Universal Time).
Celestial highlights for 2004: a transit of Venus is one of several special celestial events coming up this year
* Opportunity will reach Mars on January 25, Universal Time (evening of January 24, Pacific and Eastern Time).
So, you want to go to Mars: sorry, you can't pack your toothbrush yet. But in January 2004, two NASA rovers will bring you closer than ever to our planet next door
32-bit platforms are designed to perform time and date-related calculations, and manipulations correctly from 1/1/1970 00:00:00 through 1/18/2038 22:14:09 (2147483647) Coordinated Universal Time. If you exercise each of the APIs across this span of time, the distribution of time and date failures will vary considerably by platform.
PC And Server Y2K Compliance: How Much Is Enough?
ITEC has headquarters and a 24/7 technical support centre situated in the UK, and offers universal time zone coverage aided by extra sites in Florida, Singapore and Malaysia.
Exclusive Networks Group Acquires ITEC
The first asteroid discovered in 2014 entered the Earth's atmosphere late 1 January (2 January Universal time) over the mid-Atlantic ocean, reports NASA.
First Asteroid Discovered in 2014 Hits Earth's Atmosphere; Burns Up Over Atlantic Ocean
Given our longitude, the natural zone for us is Greenwich Mean Time, now known as Universal Time. Why then, you might ask, is France not on UT?
Stick with GMT; & COMMENT DEBATE YOUR LETTERS TO THE NATIONAL NEWSPAPER OF WALES
The eclipse will begin at 8:33 according to Universal Time (UT) while it will be visible in Pakistan at 14:33 hrs according to Pakistan Standard Times (PST).
Penumberal moon eclipse to occur on July 7: PMD
The new crescent of the Hijric month 'Rabia II 1440 H' will be born on Friday, 'Rabia I 29 1440 H', (December 7, 2018) at 10.21am Doha time (7.21am Universal Time), according to the astronomical calculations by Qatar Calendar House (QCH).
First of Rabia II 1440 H on Saturday, says QCH
Geological Survey (USGS), the earthquake struck about 33 miles deep at about 99 miles east-northeast of Anatahan at 22:35 UTC ( Universal Time Coordinated).
6.4 magnitude earthquake jolts Anatahan region
Is it competitive with Universal Time, or is it used in conjunction with Universal Time as a logging tool?
Why Julian days?