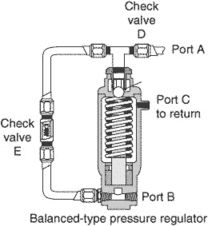 When the pressure regulator is in the operating position as shown here, check valve D is seated, the piston is held down by the spring, and fluid from the power pump flows to the system through external line and check valve E. Check valve D is held on its seat by pressure. The same pressure is transmitted through port B and acts on the bottom of the piston, exerting a force that tends to move the piston up and open the check valve D.
A special type of pressure regulator installed as part of an accumulator system. Its functions are to direct fluid into the accumulator system, to maintain pressure within set pressure limits, and to unload completely and bypass all fluid flowing in the line from the pump back to the reservoir with no restriction except the resistance offered by the friction of the fluid flowing through the tubing. The valve begins unloading the accumulator system when the accumulator-system pressure drops to the lower limit of the set pressure range. The valve unloads and bypasses the fluid output of the pump back to the reservoir when the accumulator pressure reaches the upper limit of the set pressure range.
An Illustrated Dictionary of Aviation Copyright © 2005 by The McGraw-Hill Companies, Inc. All rights reserved