[′vā·pə‚rīz·ər]
(chemical engineering)
A process vessel in which a liquid is heated until it vaporizes; heat can be indirect (steam or heat-transfer fluid) or direct (hot gases or submerged combustion).
McGraw-Hill Dictionary of Scientific & Technical Terms, 6E, Copyright © 2003 by The McGraw-Hill Companies, Inc. 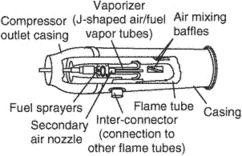 A type of burner in which the fuel is sprayed into J-shaped tubes protruding into the combustion chamber. The course spray mixed with primary air passes down the tubes and is vaporized before it emerges into the combustion zone.
An Illustrated Dictionary of Aviation Copyright © 2005 by The McGraw-Hill Companies, Inc. All rights reserved

(Electronic-CIGARETTE) A cigarette-shaped canister filled with liquid nicotine in various potencies. A vapor is inhaled, giving the person the satisfaction of a tobacco cigarette. The user's inhalation triggers the unit to heat and atomize the liquid into a vapor. Available in rechargeable and disposable varieties, a light glows when the unit is vaporizing.

Although many people use them to help quit or cut down on smoking, e-cigarettes are designed as a tobacco substitute, and vendors naturally want perpetual customers. For regular users, their advantage is twofold: they are healthier because there is no smoke and no tar, and secondly, people are able to use them in many venues where cigarettes are prohibited. Called "vaping" (for vaporizing), the various exhaled vapor aromas are mild, pleasing and nowhere near as unsavory to other people as is tobacco cigarette smoke.

Feedback
Flashcards & Bookmarks ?
Please log in or register to use Flashcards and Bookmarks. You can also log in with
Flashcards ?
My bookmarks ?
+ Add current page to bookmarks
Mentioned in ?
References in periodicals archive ?
Per the new pact, Canadian patients will have the opportunity to obtain free legal representation from SOS Cannabis for pursuing reimbursement from different government agencies for purchasing RYAH's Health Canada Class I dose-measuring vaporizer and proprietary dry-herb cartridges.
Looking for Free Legal Representation for Government Reimbursement on Cannabis Products? RYAH Medtech's Got Your Back -- CFN Media
Storz & Bickel, a subsidiary of Canopy Growth based in Tuttlingen, Germany, has a 22-year history as the global leader in vaporizer design.
Canopy Growth and Greenlane Announce Exclusive Distribution Partnership for Storz & Bickel Vaporizers in the United States
distribution partner in January 2018, a few months before the premium vaporizer designer and manufacturer was acquired by Canopy Growth in December 2018 for $145 million.
Canopy Growth, Greenlane Strike Exclusive Distribution Deal For Storz & Bickel Vaporizers
As per the Agreement, Aurora is now offering a range of high-quality vaporizers to its medical patients through the Company's online platform.
E-Cigarettes and Vaporizer Market Business Strategy Based On, Industry News, Supply Chain Analysis, Price Analysis, Gross Margin and Porters Five Force Analysis by Fast Forward Research
To mark the growth plans and the rebrand, VPZ not only projected its logo onto the 177ft wingspan of the Angel of the North, but also beamed images of a vaporizer and its logo onto Baltic art gallery, Newcastle Castle, St James' Park, Newcastle University, the Civic Centre and the Millennium Bridge.
Crafty vape firm lights up the Angel
Tel Aviv-based Kanabo Research, a medical-cannabis R&D firm, announced on Tuesday that the ministry certified the company's VapePod vaporizer for the use of medical cannabis extracts and formulations, reportedly making international precedent.
Israel May be First Country to Approve Marijuana Vaporizer for Medical Use
According to Ubial, the DOH and FDA are already studying the possibility of coming out with an order on the use of e-cigarettes and vaporizers.
DOH eyes regulation of e-cigarettes
"Many former smokers enjoy the look and feel of an e-cig, which resembles a traditional cigarette, compared to the larger personal vaporizers," Wiesehan says.
New Mistic Technology Bridges gap
"The new V2 Pro vaporizer line is all about consumer choice," says Jan Verleur, CEO and co-founder of V2 Electronic Cigarettes.
Vape your way
That is why personal nicotine vaporizers should be actively promoted as an alternative to tobacco products, aided by endorsements from health authorities, tax advantages and support from the anti-smoking movement.
The beef against electronic cigarettes is based on false evidence
Soleil Capital is a technology holding company, whose assets include issued US and Chinese patents for atomization related products including technology for medical marijuana vaporizers and electronic cigarette products and components.
Soleil Capital acquires electronic cigarette and personal vaporizer patents
He frequently goes to Thar and other rural areas to tell/ teach people to pass all drinking water through solar vaporizers for cleaning without any running costs.
... working silently