(vûr`nēr), auxiliary scale, either straight or an arc of a circle, designed to slide along a fixed scale. Its unit divisions, usually smaller than those on the fixed scale, permit a far more precise reading. The vernier is attached to the scales of instruments employed for very accurate linear or angular measurements; these include the transit, sextant, barometer, compass, and caliper. It was devised by a French mathematician, Pierre Vernier, who described it in his Construction, usage et propriétés du quadrant nouveau de mathématiques (1631). Certain auxiliary control mechanisms used for fine measurements or adjustments are often called verniers.
The Columbia Electronic Encyclopedia™ Copyright © 2013, Columbia University Press. Licensed from Columbia University Press. All rights reserved. www.cc.columbia.edu/cu/cup/

(ver -nee-er) A short scale used to increase the accuracy of the graduated scale to which it is attached. If nine divisions of the vernier correspond to 10 divisions of the instrument scale, the latter can be read to a further decimal place.
Collins Dictionary of Astronomy © Market House Books Ltd, 2006
The following article is from The Great Soviet Encyclopedia (1979). It might be outdated or ideologically biased.

(2) In radio engineering a device for the exact tuning of radio receivers and other radio equipment.

an auxiliary scale used to read fractions of divisions on the main scale of a measuring device. A prototype of the modern vernier was proposed by the French mathematician P. Vernier. [The Russian term, nonius, comes from the name of

the Portuguese P. Nunes, latinized to Nonius, who proposed a similar device as a means for reading fractions of scale divisions; this device is no longer used.] There are several types of vernier: linear (Figure 1, a), goniometric (Figure 1, b), spiral (Figure 2), and transverse (Figure 3). 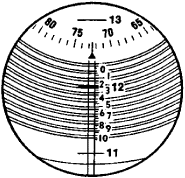 Figure 2. Spiral vernier. In the field of vision are the lines of the main millimeter scale (11, 12, 13), one of which is within the zone of ten divisions of the small scale, and also a part of the circular scale, which consists of 100 divisions and two equidistant Archimedean spirals. For reading, a division of the millimeter scale must be in the exact center between two adjacent spirals. Readings are made sequentially on all three scales.

k is the number of vernier divisions from the zero division to the division that coincides with the mark on the main scale, and i is the smallest fraction of a division of the main scale that can be measured with the vernier (usually i = 0.1, 0.05, or 0.02 mm). The principle of reading from a goniometric vernier (used in a 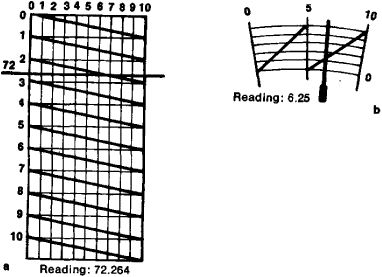 Figure 3. Transverse verniers: (a) Linear vernier (transverse scale). A division of the main scale (72) intersects one of the diagonal lines on the vernier. Readings are made according to the location of the point of intersection of the lines and the diagonals. (b) Goniometric vernier; its principle of reading is similar.

number of opticomechanical instruments) is the same as for a linear vernier. The operation of other types of vernier is explained in Figures 2 and 3.

[′vər·nē·ər]
(engineering)
A short, auxiliary scale which slides along the main instrument scale to permit accurate fractional reading of the least main division of the main scale.
McGraw-Hill Dictionary of Scientific & Technical Terms, 6E, Copyright © 2003 by The McGraw-Hill Companies, Inc.

An auxiliary scale sliding against and used in reading a primary scale; the total length of a given number of divisions on a vernier is equal to the total length of one more or one less than the same number of divisions on the primary scale; makes it possible to read a principal scale much closer than one division of that scale.
McGraw-Hill Dictionary of Architecture and Construction. Copyright © 2003 by McGraw-Hill Companies, Inc.

1. a small movable scale running parallel to the main graduated scale in certain measuring instruments, such as theodolites, used to obtain a fractional reading of one of the divisions on the main scale
2. an auxiliary device for making a fine adjustment to an instrument, usually by means of a fine screw thread
Collins Discovery Encyclopedia, 1st edition © HarperCollins Publishers 2005

Feedback
Flashcards & Bookmarks ?
Please log in or register to use Flashcards and Bookmarks. You can also log in with
Flashcards ?
My bookmarks ?
+ Add current page to bookmarks
Mentioned in ?
References in periodicals archive ?
Be to, jai budingi ir iprastos Vernier velinimo linijos trukumai--reikalingas dvieju velinimo liniju elementu velinimo trukmiu DBD ?
Laikinio skaitmeninio keitiklio skiriamosios gebos didinimas
As of Monday afternoon, Vernier has not been arraigned on the felony charge of conspiracy to defraud financial institutions and no court hearings have been scheduled yet.
TruNorth FCU Victim of $145M Check Scheme
Both bivariate data between carapace length and measured burrows with the Vernier (Fig.
Comparison of three quick methods to estimate crab size in the land crabs Cardisoma guanhumi Latreille, 1825 and Ucides cordatus (Crustacea: Brachyura: Gecarcinidae and Ucididae)
However, the vernier acuity measurements identified early visual abnormalities in the eyes of those with birthmarks.
Infants to benefit from early detection test
To monitor his adjustments, John glued a vernier scale to the barrel of his lens.
Two focusing tools for astrophotography: here's an easy way to get pinpoint stars with your telephoto lens
This spring, science and math educators can participate in a series of FREE hands-on workshops sponsored by Vernier Software & Technology.
Free technology workshops for educators
This lets users make incremental adjustments for critical diameter tolerances without using a Vernier scale.
Adjustable boring head with fine resolution
Givaudan, Vernier, Switzerland, has entered into a multi-year research and development collaboration and licensing agreement with Redpoint Bio Corp.
Givaudan, Redpoint Bio partner
Adjustment accuracy is 0.0004" per graduation on an easy-to-read scale and 0.000 08" from a vernier, with a total adjustment path of up to 0.197".
Finish boring system
What are measured in engineering by vernier callipers?
LEISURE TIME: QUIZ CHALLENGE
Full-time science teachers from elementary to college level are eligible to apply for the Vernier Software & Technology/ National Science Teachers Association Technology Award.
Deadline approaching for The NEA Foundation's October Grant Review