The highest point of a structure; the apex or summit.
Illustrated Dictionary of Architecture Copyright © 2012, 2002, 1998 by The McGraw-Hill Companies, Inc. All rights reserved

In geometry, a vertex is the pivot point of an angle. In astrology, the vertex is the point in a horoscope where the prime vertical intersects the ecliptic in the west. The antivertex is the corresponding point in the east. The vertex was discovered/invented by L. Edward Johndro and elaborated upon by Charles Jayne. The point where the vertex falls in a chart is said to be the most fated (i.e., least amenable to conscious choices) part of the horoscope. All major astrological chart-casting software programs allow one to calculate the vertex.

[′vər‚teks]
(astronomy)
The highest point that a celestial body attains.
On a great circle, that point that is closest to a pole.
(mathematics)
For a polygon or polyhedron, any of those finitely many points which together with line segments or plane pieces determine the figure or solid.
The common point at which the two sides of an angle intersect.
The fixed point through which pass all the elements of a cone or conical surface.
An intersection of a conic with one of its axes of symmetry.
A member of the set of points that are connected by the edges. Also known as node.
For a simplex, one of the finite set of points on which a simplex is based.
(optics)
One of the points where the surface of a lens intersects the optical axis.
McGraw-Hill Dictionary of Scientific & Technical Terms, 6E, Copyright © 2003 by The McGraw-Hill Companies, Inc. 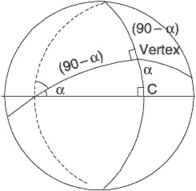 Every great circle intersects two points, 180° apart. These points are 90° away from the longitude of the vertices. The angle at which the great circle intersects the equator is equal to the co-latitude of the vertices. The purpose of determining position of the vertex is to facilitate calculation of intermediate position along the great circle track between which short rhumb-line courses can be steered. Based on the fact that the great circle track intersects the meridian of the vertex at 90°, Napier's rule can be used to solve the successive right angles to obtain intermediate positions.
i. The last fix adapted on the arrival speed segment. Normally, it will be the outer marker of the runway in use. However, it may be the actual threshold or another suitable common point on the approach path for the particular runway configuration.
ii. In astronavigation, the vertex of a great circle is the point at which the great circle is nearest the geographic pole—that is, the point at which it reaches the maximum latitude. Every great circle has two vertices (one in each hemisphere). In the solution of great-circle sailing problems, only the vertex nearest the arc forming the great-circle track is considered.
An Illustrated Dictionary of Aviation Copyright © 2005 by The McGraw-Hill Companies, Inc. All rights reserved

A corner point of a triangle or other geometric image. Vertices is the plural form of this term. See vertex shader.
Copyright © 1981-2019 by The Computer Language Company Inc. All Rights reserved. THIS DEFINITION IS FOR PERSONAL USE ONLY. All other reproduction is strictly prohibited without permission from the publisher.

Feedback
Flashcards & Bookmarks ?
Please log in or register to use Flashcards and Bookmarks. You can also log in with
Flashcards ?
My bookmarks ?
+ Add current page to bookmarks
Mentioned in ?
References in periodicals archive ?
Kewalramani joined Vertex in February 2017 and currently serves as the company's Executive Vice President, Global Medicines Development and Medical Affairs, and Chief Medical Officer.
Vertex Announces Dr. Jeffrey Leiden to Transition to Role of Executive Chairman, Effective April 1, 2020 and Dr. Reshma Kewalramani Appointed as New Chief Executive Officer
"This agreement with Vertex reflects the strong collaboration we have built together in other programs and underscores Vertex's commitment to gene editing," said Samarth Kulkarni, Ph.D., Chief Executive Officer of CRISPR Therapeutics.
Vertex Pharmaceuticals (NASDAQ: VRTX) - Vertex Expands into New Disease Areas and Enhances Gene Editing Capabilities Through Expanded Collaboration with CRISPR Therapeutics and Acquisition of Exonics Therapeutics -- 6/6/2019
Under the terms of the acquisition, Vertex will acquire all outstanding shares of Exonics, which will become a separate wholly-owned subsidiary of Vertex.
Vertex Expands into New Disease Areas and Enhances Gene Editing Capabilities Through Expanded Collaboration with CRISPR Therapeutics and acquisition of Exonics Therapeutics
Vertex's Aerospace Defense Services business line Senior Vice President and General Manager Richard Caputo says Vertex is ready for the challenge and excited to explore new opportunities within the DOD.
Madison-based Vertex Aerospace grows presence in U.S. and abroad
Suppose that v [member of] R is an active vertex. Take a type 1 gadget K, mark it, and let [M.sub.K] denote an arbitrarily chosen perfect matching in K ([M.sub.K] exists since K is a balanced complete bipartite graph).
On Embedding Degree Sequences
Now denotes current data, k denotes label of relations, and z is label of neighbor vertex [[??].sub.z].
Temporal Activity Path Based Character Correction in Heterogeneous Social Networks via Multimedia Sources
(II) [T.sub.2]: a tree with a minor vertex [omega] and at least 3 major vertices adjacent to w.
Infinitely Many Trees with Maximum Number of Holes Zero, One, and Two
It is used to change a path to get a new end vertex as shown in Figure 2.
HybridHAM: A Novel Hybrid Heuristic for Finding Hamiltonian Cycle
3D Systems will continue to offer Vertex Dental and NextDent's existing portfolios and will continue to sell to and serve all current customers.
3D Systems to Acquire Dental Materials Firm NextDent
A binary digits code is used to identify the precise position of a vertex in [K.sup.n.sub.m,t] and the exact time which is linked to [K.sup.n.sub.m,t].
Structure Properties of Koch Networks Based on Networks Dynamical Systems
Let [G.sub.1] and [G.sub.2] be two vertex disjoint graphs.
Generalized Characteristic Polynomials of Join Graphs and Their Applications
A vertex-based tamper detection algorithm can accurately locate the altered vertex but cannot consider the modifications of the topological relationship.
A Low-Complexity Region-Based Authentication Algorithm for 3D Polygonal Models