vertical circle, in astronomy, the great circle on the celestial sphere that passes from the observer's zenith through a given celestial body. In the altazimuth coordinate system the altitude of a body is measured along its vertical circle.
The Columbia Electronic Encyclopedia™ Copyright © 2022, Columbia University Press. Licensed from Columbia University Press. All rights reserved.

A great circle on the celestial sphere that passes through an observer's zenith and cuts the horizon at right angles.
Collins Dictionary of Astronomy © Market House Books Ltd, 2006
The following article is from The Great Soviet Encyclopedia (1979). It might be outdated or ideologically biased.

A graduated disk mounted on an instrument in such a manner that the plane of its graduated surface can be placed in a vertical plane.
McGraw-Hill Dictionary of Architecture and Construction. Copyright © 2003 by McGraw-Hill Companies, Inc. 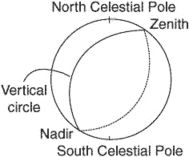