[′vid·ē·ō ′am·plə‚fī·ər]
(electronics)
A low-pass amplifier having a band width on the order of 2-10 megahertz, used in television and radar transmission and reception; it is a modification of an RC-coupled amplifier, such that the high-frequency half-power limit is determined essentially by the load resistance, the internal transistor capacitances, and the shunt capacitance in the circuit.
McGraw-Hill Dictionary of Scientific & Technical Terms, 6E, Copyright © 2003 by The McGraw-Hill Companies, Inc.
The following article is from The Great Soviet Encyclopedia (1979). It might be outdated or ideologically biased.

a wide-band tube or semiconductor amplifier used in television, radar, oscillographs, and other equipment to amplify video signals before passing them on to a cathode-ray tube. To preserve the shape of the video signals, a video amplifier must amplify them uniformly (with no more than 1-3 decibels’ variation) over a wide frequency pass band (from 10-30 Hz up to 4-6 MHz) without appreciable phase distortion. Circuits of one- and two-stage video amplifiers, with a low-value resistor and various combinations of inductance coils, capacitors, and resistors in the load circuit of the gain stage, are the most commonly used. These combinations are selected in such a way as to increase the gain in the low and high-frequency regions, thus producing uniform gain and reducing phase distortions over a very wide frequency band. The circuit and amplitude-frequency response of a one-stage tube video amplifier are shown in Figure 1. 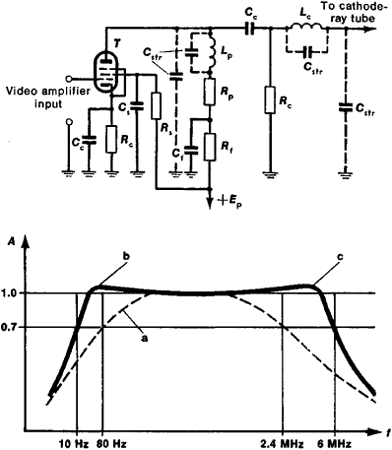 The gain increase (correction) at high frequencies is attained as a result of resonance phenomena in the oscillatory circuits formed by the inductances Lp and Lc with the stray (spurious) circuit capacitances Cstr, and at low frequencies by the choice of the parameters for the plate circuit decoupling network RfCf.

A low-pass amplifier having a bandwidth in the range from 2 to 100 MHz. Typical applications are in television receivers, cathode-ray-tube computer terminals, and pulse amplifiers. The function of a video amplifier is to amplify a signal containing high-frequency components without introducing distortion.

Feedback
Flashcards & Bookmarks ?
Please log in or register to use Flashcards and Bookmarks. You can also log in with
Flashcards ?
My bookmarks ?
+ Add current page to bookmarks
Mentioned in ?
References in periodicals archive ?
Irvine, CA, May 22, 2015 --(PR.com)-- Pasternack, a leading manufacturer and supplier of RF, microwave and millimeter wave products, introduces an all new line of broadband log video amplifiers covering multi-octave bandwidths from 0.5 GHz to 18 GHz.
The new logarithmic video amplifiers from Pasternack utilize GaAs semiconductor technology which is beneficial for high speed applications while maintaining flatness and accuracy throughout the desired frequency band.
Pasternack Announces New Log Video Amplifiers with Broadband Performance Up to 18 GHz
Hittite launched two successive detection log video amplifiers (SDLVA) that operate over the 0.6 GHz to 20 GHz and 2 GHz to 20 GHz frequency ranges, respectively.
Successive detection log video amps are offered in die and module packaging
DinionXF's built-in cable compensation enables cable lengths of up to 3,280ft (1km) to be used without the need for costly video amplifiers. Combined with Bosch's advanced new Divar digital recording systems, the DinionXF is designed for high-security surveillance applications.
Bosch introduces new 15-bit image-processing technology in New DinionXF CCTV cameras
Just-in-time communities will embrace us as we are trying to grapple with such tasks as learning how to understand the difference in design constraints between audio and video amplifiers or how to ride a unicycle.
What will happen in the next 50 years?
The HCDL-4-9000 series logarithmic video amplifiers have integrated digital outputs, threshold detection and timing/control circuitry for digital interfacing.
Digitally interfaced logarithmic amplifiers
Extra cabling may be required for additional control functions, or alternatively, additional problems may arise when trying to integrate 'up the coax' type systems with video amplifiers and line correctors.
Picturing the future of CCTV
This would require the use of video amplifiers on the correlator output which leads to other problems.
The evolution of ultra-wideband receivers
This is the maximum DC offset voltage the detector amplifier can have (over temperature) and is too low for integrated circuit high speed video amplifiers. There are three methods for minimizing the degradation in logarithmic conformity associated with DC offset voltages:
RF detector logarithmic video amplifier
High Speed Video Amplifiers for Medical Imaging Applications
Medical electronics: revolutionary medical technology increases demand for flexible interconnects