[vi′skäm·əd·ər]
(engineering)
An instrument designed to measure the viscosity of a fluid.
McGraw-Hill Dictionary of Scientific & Technical Terms, 6E, Copyright © 2003 by The McGraw-Hill Companies, Inc.
The following article is from The Great Soviet Encyclopedia (1979). It might be outdated or ideologically biased.

an instrument for the determination of viscosity. The most common types of viscometer are capillary, rotary, falling-sphere, and ultrasonic.

The determination of viscosity with a capillary viscometer is based on Poiseuille’s law and consists in the measurement of the flow time of a known quantity (volume) of liquid or gas through narrow tubes of circular cross section (capillaries) with a given pressure drop. Capillary viscometers are used to measure viscosity from 10-5 newton · sec/m2 (N·sec/m2) for gases to 104 N·sec/m2 for solid lubricants. The relative error of master capillary viscometers is ± 0.1-0.3 percent; of working instruments ± 0.5-2.5 percent. The construction of various types of glass viscometer is shown in Figure 1. In capillary viscometers of the types indicated, the flow of liquid occurs under the influence of gravity—at the starting moment the level of fluid in one arm is higher than in the other. The discharge time of the measuring reservoir is defined as the interval between the moments when the liquid level passes the marks at the upper and lower ends of the reservoir. In automatic (continuous-action) capillary viscometers the fluid enters the capillary from a constant-output pump. The pressure drop in the capillary, measured with a manometer, is proportional to the unknown viscosity. 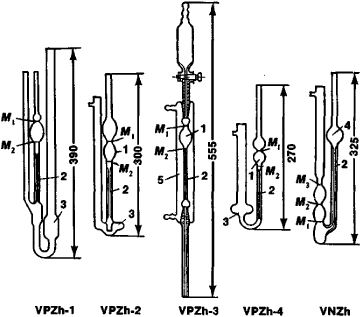 In rotary viscometers, the viscous medium being investigated is in the space between two coaxial bodies (cylinders, cones, spheres, or a combination of them); one of these bodies (the rotor) turns, and the other is fixed. The viscosity is determined by the torque moment at a given angular velocity or by the angular velocity at a given torque moment. Rotary viscometers are used to measure the viscosity of lubricating oils (at temperatures up to -60° C), petroleum products, molten silicates and metals (up to 2000° C), highly viscous varnishes and cements, and clay mortars. The relative error of the most common rotary viscometers is between 3 and 5 percent. The construction of the RV-7 rotary viscometer, with limits of measurement from 1 to 105 N·sec/m2 and an error of ±3 percent, is shown in Figure 2. 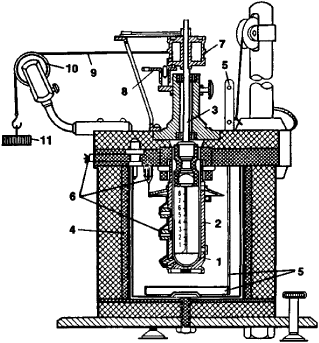 The action of a viscometer with a sphere that moves in the medium under investigation is based on Stokes’ law; viscosity is determined according to the speed of passage of the falling ball between the marks on the tube of the viscometer. The widely used Hoeppler universal viscometer, with a “sliding” sphere (Figure 3), belongs to this type of instrument. The limits of measurement for viscometers of this type are 6 x 10-4 to 250 N-sec/m2, with an error of ± 1-3 percent. 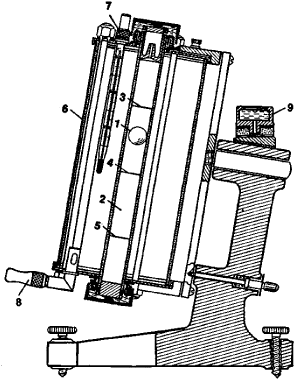 The operation of ultrasonic viscometers is based on the measurements of the rate of decay of vibrations in a plate made of magnetostrictive material immersed in the medium under investigation. The vibrations arise from short (10-30 microsec) impulses of current in a coil wound onto the plate. When the plate vibrates, electromotive force is induced in the coil that decreases with a speed that is dependent on the viscosity of the medium. When the electromotive force decreases to a certain threshold value, a new excitational impulse enters the coil. The viscosity of the medium is deter-mined according to the frequency of the succession of impulses. Ultrasonic viscometers are used to measure viscosities in the range from 10-3 to 500 N·sec/m2, with a relative error of ± 5 percent.

In addition to viscometers that permit the expression of the results of measurements in units of dynamic or kinematic viscosity, there are also viscometers for measuring the viscosity of liquids in arbitrary units. This kind of viscometer consists of a vessel with a calibrated discharge tube; viscosity is evaluated according to the time of discharge for a certain volume of liquid. For example, by means of VZ-1 and VZ-4, viscometers, which are designed for research on varnishes and paints, viscosity is expressed in seconds, and with VU (Engler) viscometers, for petroleum products, it is ex-pressed in Engler degrees. The conversion of arbitrary units into units of viscosity of the International System of Units (N·sec/m2 and m2/sec) is possible but inaccurate.

A device for determining viscosity; esp. used to measure the viscosity of slurries, including fresh concrete.
McGraw-Hill Dictionary of Architecture and Construction. Copyright © 2003 by McGraw-Hill Companies, Inc.

Feedback
Flashcards & Bookmarks ?
Please log in or register to use Flashcards and Bookmarks. You can also log in with
Flashcards ?
My bookmarks ?
+ Add current page to bookmarks
Mentioned in ?
References in periodicals archive ?
Geographically, the global blood viscometer market is segmented into North America, Asia Pacific, Europe, Middle East & Africa and South America.
Blood Viscometer Market 2024: Top Player Ametek Inc., Lamy Rheology, RheoSense Inc etc To Grow at CAGR of 3.74% / Radiant Insights, Inc
On the basis of product, the rheometers and viscometers market is segmented into rheometers (further segmented into dynamic rotational rheometers, torque rotational rheometers, capillary rheometers, oscillatory rheometers, high-throughput rheometers and other rheometers) and viscometers (further segmented into rotational viscometers, process viscometers, capillary viscometers and other viscometers).
RHEOMETERSAND VISCOMETERS MARKET WORTH $878.6 MILLION BY 2023
Different viscometers measure viscosity at different shear rate ranges.
Optimum viscosity for paint application
The analytical choice in most laboratories is the rotational viscometer, which measures the viscous drag on a rotating disk having a known spacing to the cylinder containing the sample being measured.
"As scheduled or "as needed?" Advances in oil viscosity sensor technology may prompt new look at engine and equipment maintenance cycles
The rheometer data in Table 2 was obtained using a conventional cone and plate viscometer. Flow loop data was determined by measuring the proportional ratio of pressure drop of the fluid through a flow path, then applying the Hagen-Poiseuille formula.
In-line viscosity monitoring cuts operating costs
Controlling black liquors with high solids content takes an on-line viscometer that can reliably measure the viscosity.
Evaluation of a capillary-coriolis instrument for on-line viscosity and density measurements of kraft black liquor
A Relative Viscometer Model Y501 has been introduced from Viscotek.
Relative Viscometer. (Supplier's Corner)
Toluene will be the first liquid reference material for viscometer calibrations both at atmospheric as well as at elevated pressure.
IUPAC SUBCOMMITTEE ON TRANSPORT PROPERTIES MEETING AT NIST (BOULDER)
The viscometer links a laptop computer, an optical scanner, and a closed system of tubing containing the blood sample.
New blood viscometer
A viscometer that will work with difficult products is tough to find.
Getting viscometry in line: a viscometer that will work with difficult products is tough to find
The Premier MV (Mooney viscometer) measures viscosity, scorch and stress relaxation of raw materials and mixed rubbers.
Mooney viscometer