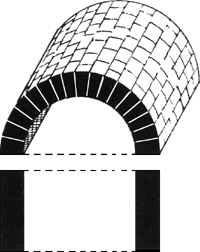 wagon-headed: vault
A stage mounted on wheels or rollers, usually powered; moves horizontally for the quick change of an entire theatrical setting.
McGraw-Hill Dictionary of Architecture and Construction. Copyright © 2003 by McGraw-Hill Companies, Inc.

Feedback
Flashcards & Bookmarks ?
Please log in or register to use Flashcards and Bookmarks. You can also log in with
Flashcards ?
My bookmarks ?
+ Add current page to bookmarks
Mentioned in ?
References in periodicals archive ?
"It was a mud wagon stage coach (a rugged vehicle for use in particularly rough country)," J.R.
Time traveler: wagons, buggies transport Iowa collector to a different era
THE travelling actors of Oddsocks theatre company will set up their unique wagon stage in the grounds of Dilston Hall for picnicking Shakespeare fans.
culture: HOT TICKET
(43) On the analogy of such examples, it is possible that, on the medieval pageant wagon stage, journeys and other less extensive movements from place to place, were likewise expressed in a shorthand way.
The paved roadway and adjacent ground-level spaces were annexed to the wagon stage in a number of the Toronto pageant performances.
Were journeys signalled but not strictly enacted; and did characters who were not, strictly, operating in the same physical location, deliver their lines in close physical proximity to other actors on the wagon stage? If this was so, then the use of the street in York does not seem quite so compelling.
Raging in the streets of medieval York
(6) The following pages will examine some specific uses of the platea in the York Cycle--particularly in The Flood, Abraham and Isaac, The Nativity, The Entry into Jerusalem, and The Crucifixion--arguing that the use of the street as platea was limited specifically to its function as a contrast to the iconography of the wagon stage. Characters leave the wagon or approach it as a means of interrupting or re-establishing the iconic moment represented by that pageant.
The street is not simply extra space to be used whenever the wagon stage seems too small.
Performed on moveable wagon stages in the streets of the city, it posits a constantly shifting relationship between the biblical stories represented, the spectators, and the city itself.
The pageant wagon as iconic site in the York Cycle
'Herod and the Magi' kept the action closer in; by not allowing the Magi to stray too far, the wagon stage maintained its integrity as the location on which the action depended.
A series of quarter- and semi-circular panels filled the wagon stage like a pop-up card.
First, designers and directors have learned to value the simplicity of the wagon stage. Clear designs based on well-defined icons carry the meaning of the pageant to spectators near to or far from the platform.
The Toronto York Cycle: Design and Technical Display