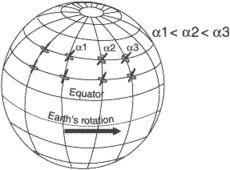 Gyro α at position 1 has its spin axis aligned with true North. The gyro maintains its alignment in space, the direction of true North relative to the gyro changes as the earth rotates and the observer's position in space moves through positions 2 and 3 to 4. This is apparent wander. Its value is zero at equator and increases as one moves toward the poles where it is maximum.
The movement of the spin axis of a gyroscope from its original position. Its value is the maximum at the poles and the least at the equator. This is one of the errors or shortfalls in a gyroscope.
An Illustrated Dictionary of Aviation Copyright © 2005 by The McGraw-Hill Companies, Inc. All rights reserved

Feedback
Flashcards & Bookmarks ?
Please log in or register to use Flashcards and Bookmarks. You can also log in with
Flashcards ?
My bookmarks ?
+ Add current page to bookmarks
Mentioned in ?
References in classic literature ?
He wandered up and down the house and into and out of the various rooms, as if with some vague intent of bidding them adieu, but he referred neither by direct allusions nor in any other manner to the interview of the morning or the necessity of finding some other shelter.
View in context
All day long I wandered up and down the valley, and when it grew dusk I crept into a little cave, and having blocked up the entrance to it with a stone, I ate part of my little store of food and lay down to sleep, but all through the night the serpents crawled to and fro, hissing horribly, so that I could scarcely close my eyes for terror.
View in context
All that day they wandered, till at last the night came down, and they plucked branches of trees and piled the branches over them for warmth, and they were so weary that they fell asleep in each other's arms.
View in context
His eyes wandered in vacancy, for they had lost their charm and their delight--his Elizabeth, his more than daughter, whom he doted on with all that affection which a man feels, who in the decline of life, having few affections, clings more earnestly to those that remain.
Sometimes, indeed, I dreamt that I wandered in flowery meadows and pleasant vales with the friends of my youth, but I awoke and found myself in a dungeon.
Besides, some months have elapsed since the commission of his crimes, and no one can conjecture to what place he has wandered or what region he may now inhabit."
View in context
I had never seen blueberries before, and yet, at the sight of them, there leaped up in my mind memories of dreams wherein I had wandered through swampy land eating my fill of them.
For what eternities have I wandered through them, a timid, hunted creature, starting at the least sound, frightened of my own shadow, keyed-up, ever alert and vigilant, ready on the instant to dash away in mad flight for my life.
View in context
The Princess grew white with terror when she heard these words; but Ferko felt much more cheerful than he had done the first time, and wandered out into the meadows again, wondering how he was to get out of the difficulty.
Ferko wandered out into the fields again, and sat down on the stump of a tree wondering what he should do next.
View in context
by Times News Service Should the Bidiyah Municipality retrieve any camels that have been allowed to wander off, their owners will have to pay OMR15 per retrieved camel, while a recovered sheep will set owners back OMR5.
Fine for owners of wandering animals to prevent hazards
Myrtle Sarrosa considers the film 'Wander Bra,' wherein she plays the lead role, a dream come true after six years of waiting.
Myrtle Sarrosa says 'Wander Bra' her dream come true