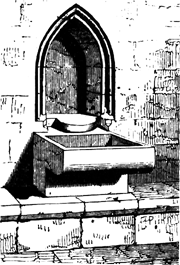 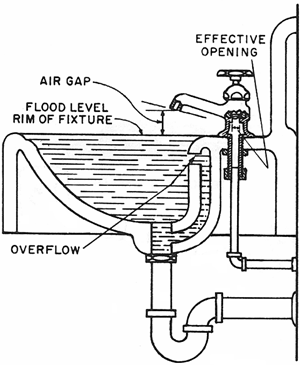 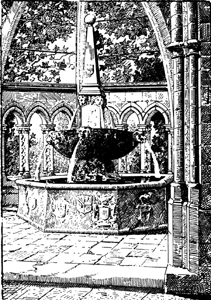 lavabo: Abbey of Valmagne
1. A basin with water supply and drainage piping, for washing the hands and face; a washbasin.
2. A room containing a washbasin and a water closet, but not a bathtub; a powder room.
3. Same as toilet, 2 or
McGraw-Hill Dictionary of Architecture and Construction. Copyright © 2003 by McGraw-Hill Companies, Inc.

Feedback
Flashcards & Bookmarks ?
Please log in or register to use Flashcards and Bookmarks. You can also log in with
Flashcards ?
My bookmarks ?
+ Add current page to bookmarks
Mentioned in ?
References in periodicals archive ?
In the lavatory on one airplane we flew in a washbowl was dispensed with altogether in favor of a very shallow drain.
Russia, 1961
Women on the Second Floor had their choice of two bathrooms, one with a tub, the other with two showers; there were plenty of big washbowls. Theoretically, one could dash from the bathroom to one's chamber in a thin robe, because the Second Floor had been partitioned off: at the head of the stairs, men were barred from passing through the doorway that led into the corridors.
Profiles of pioneer women scientists: Katherine Esau
He'd just gone out with his washbowl and picked a likely piece of ground.
Henry and the golden mine
"Then I made the room into a bunker, concreting the door into place and putting in a toilet, washbowl, bed, cooker and fridge.
MY DARK KINGDOM; HORROR OF KIDS IN THE DUNGEON Monster dad confesses to decades of depravity
If you really fancy showing off then team this up with a trendy glass washbowl or even two sinks side by side for a modern twist on a Mr and Mrs theme.
Style file on bath time; LISA ADAMS looks at the changing face of bathrooms
"I had spent pounds 400 on a new bath, toilet and washbowl and all that was taken.
THIEVES EVEN TOOK OUR KITCHEN SINK!
Cumming's mundane identification with the Dutchman was noted in such subtle touches as hanging his own black T-shirt on a fabricated clothes hook and substituting his stained coffeemaker and battered transistor radio for the washbowl in van Gogh's painting.
Robert Cumming
a white, very shallow crater within which is a minute central pit, like a plughole, the whole strongly resembling a washbowl. (1) The authors did not include the exact time of their observation, making it difficult to repeat this observation for verification.
Cassini A: the nature of the 'Washbowl' described by Wilkins & Moore on 1952 April 3
If your washbowl is badly cracked, paint the outside with white-lead paint.
OLD WIVES' TALES; Do household tips from the 1940s still work today?
Draw round the bottom of the washbowl to make a template, then find the centre of your worktop and draw out the sink shape using a marker pen.
OUR GUY GARY; The bigger the job, the bigger the challenge for expert Gary McIntyre
None of the DIY store units seem to be very big and I would like plenty of shelf area around the washbowl.
design doctor; Home Life editor DONNA HARDIE answers your DIY questions