water lily, common name for some members of the Nymphaeaceae, a family of freshwater perennial herbs found in most parts of the world and often characterized by large shield-shaped leaves and showy, fragrant blossoms of various colors. Among the plants of the family are the water lilies, lotuses, and pond lilies (called also cow lilies and spatterdocks) of the genera Nymphaea, Nelumbo, and Nuphar, respectively; however, the common names often overlap; e.g., “water lily” is used for most species of the family and even for other unrelated aquatic plants with similar flowers. Most species of Nymphaea in cultivation are tropical, but some of the hardy kinds are native to the United States and to the corresponding temperate areas of the Southern Hemisphere. Both day- and night-blooming species open at fairly definite hours. Included in the genus is the blue or white Egyptian lotus (Nymphaea caerulea or N. lotus, respectively), sacred from remote times and the national emblem of Egypt. The lotus flower is traditional in Egyptian art and architecture, as in the lotus capital. The genus Nelumbo contains two species: the American, or yellow, lotus, also called water chinquapin, is found in E North America; the Indian lotus, also called the sacred lotus or Egyptian bean, is sacred to Hinduism and to several other Asian religions, e.g., Buddhism. Its large pink blossom is used symbolically in religion and art. The seeds of the sacred lotus can remain viable after long periods of dormancy (see seed). Most species of Nuphar are native to North America. Many members of the water lily family have seeds or tubers that have been used for food; however, the fruit of the lotus-eaters of classical literature has been most often identified as that of the jujube of the buckthorn family or the nettle-tree of the elm family. Lotus is also the botanical name for a genus of the pea family. Water lilies are classified in the division Magnoliophyta, class Magnoliopsida, order Nymphaeales, family Nymphaeaceae. 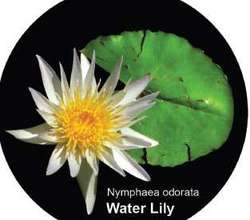 1. any of various aquatic plants of the genus Nymphaea and related genera, of temperate and tropical regions, having large leaves and showy flowers that float on the surface of the water: family Nymphaeaceae
2. any of various similar and related plants, such as the yellow water lily
Collins Discovery Encyclopedia, 1st edition © HarperCollins Publishers 2005