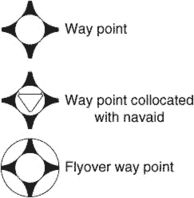 Kanom is a reporting point that lies between Kerman and Shiraj. It is at a distance of 160 NM on a radial of 257°. It is also a distance of 70 NM from Shiraj and at a radial of 077°. The total distance between Kerman and Shiraj is 230 NM. A pilot can ascertain the position of Kerman from VOR inputs from Kerman or Shiraj or both.
i. A specified geographical location used to define an area navigation route or the flight path of an aircraft employing area navigation. Waypoints are defined as either: Fly-by waypoint—A fly-by waypoint which requires turn anticipation to allow tangential interception of the next segment of a route or procedure, or Flyover waypoint—A waypoint at which a turn is initiated in order to join the next segment of a route or procedure. (ICAO)
ii. In military operations, a point or series of points in space to which an aircraft may be vectored or flown.
iii. A predetermined and accurately known geographical position forming the start or the end of a route segment.
iv. A designated point, position, or station in which a pilot can key in the radial from a VORTAC (very high frequency omnidirectional radio-range and tactical air navigation) station on which the way-point is to be located and the distance in nautical miles for the station along a selected radial to locate a destination. In this case, the waypoint may not be a fix or a prominent location.
v. Geographical or radio aid locations at which a pilot is required to report his or her position to air traffic control (ATC) in accordance with the rules in force. See compulsory reporting points.
vi. GPS (global positioning system) way points. A point or series of points fed into an aircraft GPS at which the aircraft is required to report, turn, or climb/descend.
An Illustrated Dictionary of Aviation Copyright © 2005 by The McGraw-Hill Companies, Inc. All rights reserved