see weatherweather,
state of the atmosphere at a given time and place with regard to temperature, air pressure (see barometer), wind, humidity, cloudiness, and precipitation. The term weather
..... Click the link for more information. .
The Columbia Electronic Encyclopedia™ Copyright © 2013, Columbia University Press. Licensed from Columbia University Press. All rights reserved. www.cc.columbia.edu/cu/cup/

[′weth·ər ‚map]
(meteorology)
A chart portraying the state of the atmospheric circulation and weather at a particular time over a wide area; it is derived from a careful analysis of simultaneous weather observations made at many observing points in the area.
McGraw-Hill Dictionary of Scientific & Technical Terms, 6E, Copyright © 2003 by The McGraw-Hill Companies, Inc. 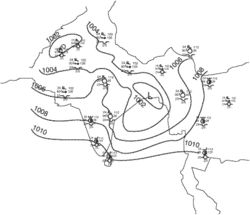 A map showing the weather conditions prevailing, or predicted to prevail, over a considerable area. Usually, the map is based upon weather observations taken at the same time at a number of stations. The weather conditions are indicated in figures and symbols. A synoptic chart is one example of a weather map.
An Illustrated Dictionary of Aviation Copyright © 2005 by The McGraw-Hill Companies, Inc. All rights reserved

Feedback
Flashcards & Bookmarks ?
Please log in or register to use Flashcards and Bookmarks. You can also log in with
Flashcards ?
My bookmarks ?
+ Add current page to bookmarks
Mentioned in ?
References in periodicals archive ?
A RI:SE spokeswoman confirmed they had received a torrent of complaints about the weather map and were planning to put Cardiff back on.
Breakfast show told to wake up after map fiasco
For in many ways, the color weather map is the newspaper industry's Rorschach test.
Whither weather color?
The new weather maps are being used on the BBC website too.
E-business: Dark clouds loom as the BBC dare to change the weather
Roberts shot to fame seven years ago when he pranced nude on a TV weather map during ITV's This Morning.
TENNIS: Streaker who made Anna Kourni-cover up her eyes
1995: Couple look on helpless as streaker leaps across Fred Talbot's weather map live on This Morning.
20 YEARS ON THE SOFA
His invasions include: Leaping on to Fred's weather map at Albert.
The naked truth
This winter we are going to suffer from normal flu and perhaps avian flu, fuel shortages and traffic chaos, much the same as any other year with the exception that this year our weather map will alternate from being a really big depressing puddle to an even bigger depressing puddle.
The Big Stuff: Winter's here and it's all bad
FOR years his weather map was one of Liverpool's biggest tourist attractions.
Flashback: Bouncing back; Rachael Tinniswood on how a weather man became an institution
Helen Young, BBC Weather Centre lead presenter, said: "Viewers will be able to see the sun shine and the rain fall on the weather map. Complex weather situations will be much clearer.
Weather goes 3-D on BBC
TV forecaster Richard Angwin pointed to his weather map - and it displayed Brewers Droop.
MUCHO SCORCHIO: OUTLOOK: LOW PRESSURE
ULRIKA Jonsson, the only person known to have put the words dull and grey on both a weather map and in a book, is gutted after a vicar told her son that Father Christmas is dead.
Brian Reade Column: SACKING OFFENCE
But no one noticed that, according to the FOXcast weather map, Edinburgh is on an island off the north coast.
Storm over US weather map howler