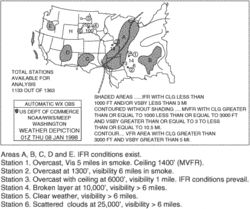 A computer-prepared chart compiled from surface aviation observations. The weather-depiction chart gives a broad overview of the observed flying category conditions at the valid time of the chart. This chart begins at 01Z (0100 h Greenwich Mean Time) each day, is transmitted at three-hour intervals, and is valid at the time of the plotted data. Data for the chart comes from the observations reported by both manual and automated observation locations. The chart indicates areas of restricted visibility and low ceilings that would not normally be shown on a synoptic or surface analysis chart. The chart shows the observed ceiling and visibility by categories as follow:
i. IFR (instrument flight rules). A ceiling less than 1000 ft and/or visibility less than 3 miles. A hatched area outlined by a smooth line.
ii. MVFR (marginal visual flight rules). A ceiling 1000 to 3000 ft inclusive and/or visibility 3 to 5 miles inclusive. A nonhatched area outlined by a smooth line.
iii. VFR (visual flight rules). No ceiling or a ceiling greater than 3000 ft and visibility greater than 5 miles. Not outlined.
These three categories are also explained in the lower right portion of the chart for quick reference.
An Illustrated Dictionary of Aviation Copyright © 2005 by The McGraw-Hill Companies, Inc. All rights reserved