rose window, large, stone-traceried, circular window of medieval churches. Romanesque churches of both England and the Continent had made use of the wheel window—a circular window ornamented by shafts radiating from a small center circle; and from this prototype developed the elaborate rose windows. The latter, in their full development, flourished especially in France, where they appear in practically every important Gothic cathedral, either over the center portal of the west front or on at least one of the transept ends. Stained glass was usually placed in them. The early examples, as on the west facade of the cathedral at Chartres (12th–13th cent.), were filled with plate tracery, pierced from a stone slab. With the perfection of bar tracery, the typical rose, as in the cathedral at Reims (13th–14th cent.) and in Notre-Dame de Paris (12th–14th cent.), was filled with numerous radiating bars and intermediate bars, joining to form pointed arches at the outer edge. In the final or flamboyant period the bars were arranged in wavy curves and more intricate patterns. This rich and closely packed tracery, as in the fine transept window of St. Ouen at Rouen, suggests the design of an open rose.

A large circular window in which the tracery radiates from the center; a variety of the rose window. 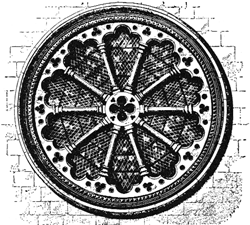 A large circular window on which the radiation of tracery from the center is suggested; a variety of rose window; a Catherine wheel window.
McGraw-Hill Dictionary of Architecture and Construction. Copyright © 2003 by McGraw-Hill Companies, Inc.