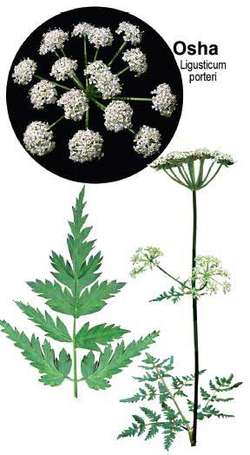 A mountain plant with parsley-like leaves and white umbrella flowers. The root is the part you want. It’s wrinkled and brown on the outside and yellow-white on the inside with a strong parsley smell. There is a red color where the leaves attach to the root crown, which has hair-like dead leafy stuff around it. Can grow to 7 ft (2m). CAUTION- it often grows next to and closely resembles poison hemlock, but differences are- Osha has a spicy celery smell, hair-like growth on root crown and wrinkled chocolate-brown roots that smell like butterscotch when split. Hemlock roots are white. Hemlock leaves smell bad and are smaller than Osha leaves, which have a strong celery odor when disturbed. Hemlock usually has purple splotches on the stem. Osha holds its seeds upright.Be careful because these two usually grow right next to each other! Do not touch if you don’t know. Poison Hemlock can be absorbed through the skin. As for Osha, the most used part medicinally is the root, which is very hairy and brown on the outside, yellow on the inside, has camphor like scent due to its essential healing oil. Osha root is anti-inflammatory, antibacterial, anti-microbial, anesthetic, antiviral, expectorant, diaphoretic, diuretic, decongestant, stimulant, prevents gas, promotes menstruation. Strong antiviral properties- take at the first sign of a cold or flu. Root can be chewed fresh for strong anti-viral properties and also increasing lung capacity, especially at higher altitudes. Very effective combined with Echinacea against bronchitis, tuberculosis, cold, flu, cough, sinusitis, toothache, arthritis, carpal tunnel, upset stomach, nausea, vomiting, indigestion. Take as powder or tea. Do not take Osha for extended periods of time, take a week-long break every couple of months. Do not use during pregnancy.
Edible Plant Guide © 2012 Markus Rothkranz