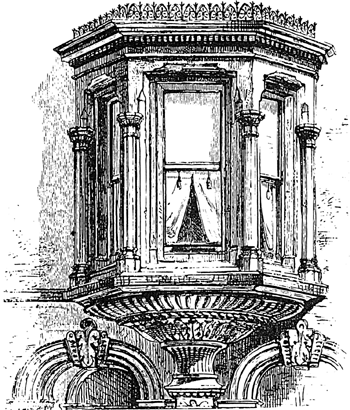 bay window
A window that protrudes from a wall, usually bowed, canted, polygonal, segmental, semicircular, or square-sided in plan; typically one story in height, although sometimes higher; occasionally corbeled out from the face of the wall, as an oriel; Also see angled bay window, bow window, cant window.
McGraw-Hill Dictionary of Architecture and Construction. Copyright © 2003 by McGraw-Hill Companies, Inc.

Feedback
Flashcards & Bookmarks ?
Please log in or register to use Flashcards and Bookmarks. You can also log in with
Flashcards ?
My bookmarks ?
+ Add current page to bookmarks
Mentioned in ?
References in periodicals archive ?
Photo: Built into window bay, cozy couch faces cabin's Danish woodstove.
Cabin couch converts into extra sleeping space
A two-story window bay links the two middle floors with a single light-filled space; a balcony in the master bedroom overlooks part of the studio below.
A four-story box that doesn't feel boxy at all
The other residences are designed with corner window bays, Juliet balconies, kitchen islands and marble bathrooms with soaking tubs.
Chamberlain's uniform strokes suit different folks
Tightly coiled at its ostensible head--the shape is clearly meant to evoke a beached leviathan--the form opens up at its tail end, empty window bays and dividing I-beam mullions (a bit of nonfunctional decoration that Mies defended as a means to "preserve and extend the rhythm" of the exterior) rolled up into a kind of thoracic expanse that snakes away from the viewer as it narrows.
Monika sosnowska: hauser & wirth
Liz Carter, a Eugene-based preservation consultant, recently visited the post office and admired its architecture and adornments, including glazed blue terra cotta around doors and the seven large window bays on the front, cream and peach colored terra cotta elsewhere on the exterior, plus decorative columns topped by floral capitals.
ART DECO GEM
Composed of brick and concrete, the building features ornamental parapet wall reliefs, vertical brick ribs that separate the window bays and a protruding central bay that forms a pronounced entrance to the building.
Welcome home: a renovation restores dignity and livelihood to a New Orleans community devastated by Hurricane Katrina
The second fire, which quickly escalated to a two-alarm fire once firefighters returned, may have started as the result of a spark falling through the window bays into the insulation in the walls.
FROM THE REGION
Window seats - Build seats into window bays or alcoves and gain extra seating;
Spotlight on space; Interiors In association with smartnewhomes.com Gabrielle Fagan shows how you can make room for family and friends all year round
To bring in more light, and make it a family-friendly eating space, Coker designed a symmetrical pair of deep window bays. One houses a table and chairs, the other encloses an intimate seating area.
Bigger, better, brighter: a weekend lake-house kitchen took on new life when the family decided to take up residence full-time
Inside the three-story structures there was room for such creative design solutions as split levels, overlooks, corner window bays, and offices tucked into stair landings.
Ross Woods
Look closely, and you'll also see that the window bays, arcades and sills bear a likeness to the sand found at Ewa beach.
Kapolei civic center. (BIA renaissance awards)