The scattering of x-rays by matter with accompanying variation in intensity in different directions due to interference effects. X-ray diffraction is one of the most important tools of solid-state chemistry, since it constitutes a powerful and readily available method for determining atomic arrangements in matter. X-ray diffraction methods depend upon the fact that x-ray wavelengths of the order of 1 nanometer are readily available and that this is the order of magnitude of atomic dimensions. When an x-ray beam falls on matter, scattered x-radiation is produced by all the atoms. These scattered waves spread out spherically from all the atoms in the sample, and the interference effects of the scattered radiation from the different atoms cause the intensity of the scattered radiation to exhibit maxima and minima in various directions. See Diffraction

The techniques employed in the study of crystalline substances, gases, and liquids are discussed below.

The Laue pattern uses polychromatic x-rays provided by the continuous spectrum from an x-ray tube operated at 35–50 kV. The different diffracted beams have different wavelengths, and their directions are determined solely by the orientations of the set of planes with Miller indices hkl. Transmission Laue patterns were once used for structure determinations, but their many disadvantages have made them practically obsolete. On the other hand, the back-reflection Laue pattern is used a great deal in the study of the orientation of crystals.

The original rotating crystal method was employed in the Bragg spectrometer. A sufficiently monochromatic beam, of wavelength of the order of 1 Å, is collimated by a system of slits and then falls on the large extended face of a single crystal as shown by Fig. 1. The Bragg spectrometer has been used extensively in obtaining quantitative measurements of the integrated intensity from planes parallel to the face of the crystal. The chamber is set at the correct 2Θ angle with a slit so wide that all of the radiation reflected from the crystal can enter and be measured. The crystal is turned at constant angular speed through the Bragg law position, and the total diffracted energy received by the ionization chamber during this process is measured. Similar readings with the chamber set on either side of the peak give a background correction. 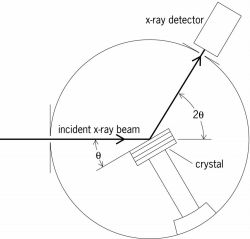 The rotation camera, which is frequently used for structure determinations, is illustrated in Fig. 2. The monochromatic primary beam s 0 falls on a small single crystal at O. The crystal is mounted with one of its axes (say, a 3) vertical, and it rotates with constant velocity about the vertical axis during the exposure. The various diffracted beams are registered on a cylindrical film concentric with the axis of rotation. The powder method involves the diffraction of a collimated monochromatic beam from a sample containing an enormous number of tiny crystals having random orientation. Powder pattern studies are made with Geiger counter, or proportional counter, diffractometers. The apparatus is shown schematically in Fig. 3. X-rays diverging from a target at T fall on the sample at O, the sample being a flat-faced briquet of powder. Diffracted radiation from the sample passes through the receiving slit at s and enters the Geiger counter. During the operation the sample turns at angular velocity ω and the counter at 2ω. The distances TO and OS are made equal to satisfy approximate focusing conditions. A filter F before the receiving slit gives the effect of a sufficiently monochromatic beam. A chart recording of the amplified output of the Geiger counter gives directly a plot of intensity versus scattering angle 2Θ. 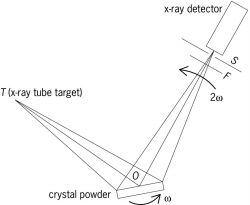 Schematic representation of the Geiger counter diffractometer for powder samples

Gases and liquids are found to give rise to x-ray diffraction patterns characterized by one or more halos or interference rings which are usually somewhat diffuse. These diffraction patterns, which are similar to those for glasses and amorphous solids, are due to interference effects depending both upon the electronic distribution of each of the individual atoms or molecules and upon their relative positions in the system.

For monatomic gases the only appreciable interference effects giving rise to a distribution of scattered intensities are those produced by the electronic distribution about each nucleus. These interference effects giving rise to so-called coherent intensities are the result of the interference of the individual waves scattered by electrons in different parts of the atom. The electronic distribution of an atom is described in terms of a characteristic atomic scattering factor which is defined as the ratio of the resultant amplitude scattered by an atom to the amplitude that a free electron would scatter under the same conditions.

One cannot, as in the cases of dilute gases and crystalline solids, derive unambiguous, detailed descriptions of liquid structures from diffraction data. Nevertheless, diffraction studies of liquids do provide most useful information. Instead of comparing the experimental intensity distributions with theoretical distributions computed for various models, the experimental results are usually provided in the form of a radial distribution function which specifies the density of atoms or electrons as a function of the radial distance from any reference atom or electron in the system without any prior assumptions about the structure. From the radial distribution function one can obtain (1) the average interatomic distances most frequently occurring in the structure corresponding to the positions of the first, second, and possibly third nearest neighbors; (2) the distribution of distances; and (3) the average coordination number for each interatomic distance.

Feedback
Flashcards & Bookmarks ?
Please log in or register to use Flashcards and Bookmarks. You can also log in with
Flashcards ?
My bookmarks ?
+ Add current page to bookmarks
Mentioned in ?
References in periodicals archive ?
Warren, X-Ray Diffraction, Dover, New York, NY, USA, 1969.
Experimental study of direct laser deposition of Ti-6Al-4V and Inconel 718 by using pulsed parameters
TABLE 1: X-ray diffraction of the gel dried in air for 5 min.
Investigation of the formation of layered nanostructure of vanadium xerogel
The focus of this paper is to determine the geotechnical engineering properties of the soil of Lahore through a number of tests and also to establish mineralogical composition of surface geology through X-Ray diffraction which greatly influences geotechnical properties.
ENGINEERING GEOLOGICAL CHARACTERIZATION OF LAHORE SOIL, BASED ON GEOTECHNICAL TESTING AND MINERALOGICAL COMPOSITION USING X-RAY DIFFRACTION
The principle of x-ray diffraction consists of homogeneous crystal lattice measurement.
Residual stress measurement by X-ray diffraction method
A custom-built X-ray diffraction system (Rigaku/MSC), shown in Fig.
Real-time wide-angle X-ray diffraction during polyethylene blown film extrusion
Elements of X-Ray Diffraction. 2nd ed., Addison-Wesley, Reading, Massachusetts, 1978.
Application of X-ray diffraction techniques in forensic science
Prof Tanner and I have dedicated the past 30 years to the advancement of non-destructive X-ray metrology techniques, such as high-resolution X-ray diffraction."
Top award for Bede founders
Since long, x-ray diffraction line broadening is used for the investigation of dislocation distributions; due to the stress fields induced by the dislocations atoms are displaced from their ideal lattice positions, which causes diffraction line broadening.
Diffraction line broadening analysis if broadening is caused by both dislocations and limited crystallite size
The TEC 4000 x-ray diffraction system non-destructively measures stresses created by processes like welding, bending, heat treating, rolling, and shot peening.
New x-ray diffraction system
InVision received grants from the TSA providing up to $3.5 million for X-ray diffraction technology enhancements and up to $2.0 million for continuous performance improvements of existing EDS technology.
InVision Technologies receives multi-million dollar awards for development of next generation explosives detection systems
In using X-ray diffraction (XRD) and the Rietveld method there are many factors that affect the results and the interpretation of the data that are collected.
Minimization of microabsorption effects in complex mixtures