[′eks ‚rā ‚gō·nē′äm·əd·ər]
(engineering)
A scale designed to measure the angle between the incident and refracted beams in x-ray diffraction analysis.
McGraw-Hill Dictionary of Scientific & Technical Terms, 6E, Copyright © 2003 by The McGraw-Hill Companies, Inc.
The following article is from The Great Soviet Encyclopedia (1979). It might be outdated or ideologically biased.

a device that permits the simultaneous recording of the direction of X rays diffracted by a specimen under study and of the position of the specimen at the time of diffraction. An X-ray goniometer can be an independent device recording the diffraction pattern on photographic film; in this case it is an X-ray camera. The term “X-ray goniometer” is also applied to goniometric devices that are components of X-ray diffractometers and are used for mounting the specimen and detector in positions corresponding to the conditions necessary for the occurrence of X-ray diffraction.

Figure 1. Schematic of a Weissenberg X-ray goniometer: (S) specimen under study, (CC) cylindrical cassette with X-ray film; the synchronous movement of the specimen and cassette is provided by gearing and a drive screw

A similar scheme can be used in X-ray goniometers for dif-fractometers. In this case, however, the angle of rotation of the specimen and the angles of rotation and inclination of the detector are read directly from graduated circles or sensing elements mounted on the corresponding shafts. In X-ray diffrac-tometers an equatorial geometry is used for the investigation of single crystals and textures: the counter moves only in one plane, and the specimen must be rotated about three mutually perpendicular axes so that the diffracted beam strikes the plane of motion of the counter. The positions of the specimen (the angles λ, Φ, and ω of its rotation about the axes of rotation) and counter (the angle 20) at the time of diffraction are read from the graduated circles (Figure 2). 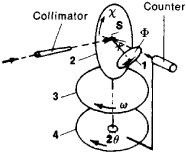 Powder specimens are investigated by means of a slightly divergent beam of X rays that converges at a single point after diffraction by the object. In this case, the Bragg-Brentano photographic scheme is used, wherein the plane of the specimen divides the scattering angle in half (Figure 3), and of the Zeeman-

Bolin scheme, wherein the focus of the X-ray tube, the specimen, and the detector slit are located on a single circle (Figure 4). 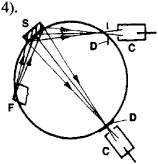 X-ray goniometers also include systems that form the primary beam—such as collimators and monochromators—and moving systems for measuring integrated intensity.