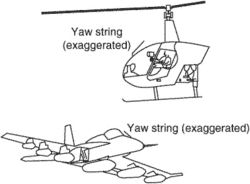 Yaw string.
A string with one end that is attached to an aircraft's canopy or is visible elsewhere to the pilot and exposed to the relative wind. Its angle shows whether the aircraft is flying straight into the airstream or at an angle.
An Illustrated Dictionary of Aviation Copyright © 2005 by The McGraw-Hill Companies, Inc. All rights reserved

Feedback
Flashcards & Bookmarks ?
Please log in or register to use Flashcards and Bookmarks. You can also log in with
Flashcards ?
My bookmarks ?
+ Add current page to bookmarks
References in periodicals archive ?
With the simplest of all flight instruments: a yaw string. Tied to the noseplate or front lower wires of a hang glider--or taped to the base of a sailplane canopy, as shown in the image below--the simple yaw string accurately shows whether a turn is in a slip, a skid or is nicely coordinated.
Soaring school: how i learned about flying airplanes by flying hang gliders
When the pilot applies the proper inputs the "yaw string" points straight back or "up" the windscreen.
Master the rudder: minimizing drag and maximizing performance through superior footwork
Note the yaw string is deflected left, while the inclinometer in the turn-and-bank instrument is deflected to the right.
About the vertical axis: it's much easier to compensate for yaw generated by ailerons and a nose-mounted engine if you understand what's going on and can anticipate it
Encyclopedia browser ?
Full browser ?
CITE
Site: Follow: Share:
Open / Close