[′zir·ō ¦lift ′aŋ·gəl]
(aerospace engineering)
The angle of attack of an airfoil when its lift is zero. 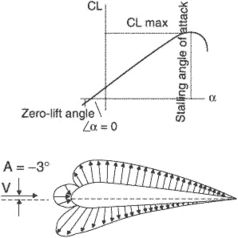 Pressure distribution on an airfoil at the angle for zero lift (−3°).
The angle of attack at which an airfoil does not produce any lift. Its value is generally less than zero unless the airfoil is symmetrical.

Feedback
Flashcards & Bookmarks ?
Please log in or register to use Flashcards and Bookmarks. You can also log in with
Flashcards ?
My bookmarks ?
+ Add current page to bookmarks
TheFreeDictionary presents:
Write what you mean clearly and correctly.
Mentioned in ?
References in periodicals archive ?
where [C.sub.L,[alpha]] is the airfoil section lift slope, [[alpha].sub.0L] is the zero-lift angle of attack, and [[alpha].sub.e]([theta]) is the effective local angle of attack.
Prediction of Lift Coefficient for Tandem Wing Configuration or Multiple-Lifting-Surface System Using Prandtl's Lifting-Line Theory