[′zōn ′tīm]
(astronomy)
The local mean time of a reference or zone meridian whose time is kept throughout a designated zone; the zone meridian is usually the nearest meridian whose longitude is exactly divisible by 15°.
McGraw-Hill Dictionary of Scientific & Technical Terms, 6E, Copyright © 2003 by The McGraw-Hill Companies, Inc.
The following article is from The Great Soviet Encyclopedia (1979). It might be outdated or ideologically biased.

a system for reckoning time, based on the division of the earth’s surface into 24 time zones. All points within a single zone have the same zone time at every moment, while the zone time of adjacent zones will differ by precisely one hour. In the system of zone time, 24 meridians separated by 15° of longitude are taken as the mean meridians of the time zones. Boundaries of the zones passing over oceans and seas, as well as over sparsely populated regions, are represented by meridians 7.5° east and west of the mean meridian. For greatest convenience, boundaries in other regions of the earth coincide with state and administrative boundaries, railroads, rivers, mountain ranges, and other natural boundaries close to the mean meridians.

By international agreement, the meridian with longitude 0° (Greenwich meridian) is taken as the initial meridian. The time zone corresponding to it is the zero zone, and its time is referred to as universal time. The other zones are assigned the numbers one through 23, going from the zero zone to the east. The difference between the zone time of a certain time zone and universal time is equal to the number of the zone.

Clocks are advanced one or more hours during the summer in many countries (daylight saving time) in order to use natural light in the most efficient manner and to conserve electrical energy. In 1930, standard time in the USSR was advanced one hour beyond zone time. As a result, all points within a given zone utilize the time of the zone to the east of their zone. Standard time in the second time zone, within which Moscow is located, is called Moscow time.

In spite of the convenience of zone time, a number of countries do not use the times of their time zones. Instead, they use over their entire territory either the local time of the capital or a time near that of the capital. The astronomical annual Nautical Almanac (Great Britain) has provided descriptions of the boundaries of time zones every year since 1941 and the accepted manner of reckoning time wherever zone time is not employed as well as all subsequent changes that have been made in time systems.

Before the introduction of zone time, most countries used civil time, which differs for every two points with different longitudes. The inconveniences associated with this system became particularly acute with the development of railroads and telegraph communications. During the 19th century, a number of countries introduced their own standard time, most often the civil time of the capital. This system, however, was not suited to countries with vast stretches of land encompassing many degrees of longitude, since the accepted way of reckoning time would significantly differ from the civil time in distant reaches of the country. In some countries, standard time was introduced only for use on railroads and with the telegraph. The civil time of the Pulkovo Observatory, referred to as St. Petersburg time, was used for this purpose in Russia.

Zone time was proposed by the Canadian engineer S. Fleming in 1878 and first in introduced in the USA in 1883. In 1884 an agreement was signed at an international conference of 26 nations in Washington, D. C, although the transition to this system of reckoning time took many years. Zone time was introduced in the Soviet Union on July 1, 1919, after the Great October Socialist Revolution. 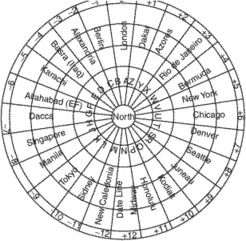 Zone time.
The local time in a given zone. The earth is arbitrarily divided into 24 zones, each 15° wide. The standard meridians of the zones are removed from Greenwich by multiples of 15°, with the extremities of all zones bounded by 7.5° east and west of the standard (central) meridian. Each zone keeps the local mean time (LMT) of its standard (central) meridian. The LMT of each zone differs from GMT (Greenwich mean time) by one hour, or multiples of one hour. The Greenwich meridian is the reference or starting point for the zones. The GMT is kept in zone 0 (i.e., 7.5° W to 7.5° E). The zones are numbered 1 through 12 east and west of Greenwich. The easterly zones are negative and the westerly zones positive; the zone numbers are the correction in the hours to be applied to the zone time to obtain the GMT. Zone time + Zone number = GMT, or Zone time = GMT − Zone number. Many zone boundary locations differ from the above for political and economic reasons.
An Illustrated Dictionary of Aviation Copyright © 2005 by The McGraw-Hill Companies, Inc. All rights reserved

Feedback
Flashcards & Bookmarks ?
Please log in or register to use Flashcards and Bookmarks. You can also log in with
Flashcards ?
My bookmarks ?
+ Add current page to bookmarks
Mentioned in ?
References in periodicals archive ?
When several observers spaced across the narrow graze zone time all events, a detailed profile of the lunar mountains can be constructed.
The last Spica occultation
"It was frustrating to give them the two goals back right after we'd scored in the first but in the second we got back to our game, got pucks in and a lot of zone time and that gave us a lot of momentum.
Blaze boost hopes of play-off spot with hard-fought victory; ICE HOCKEY
"Teams that hang onto the puck against us they get more zone time and off of that they get shots and momentum in the game." RESULTS Golden Knights 4 Blackhawks 2 Penguins 2 Oilers 1 (OT) Islanders 5 Coyotes 3 Ducks 6 Flyers 2 Kings 3 Senators 2 (SO) Sabres 1 Red Wings 0 Flames 3 Predators 2 (SO) Canucks 1 Wild 0
Golden Knights stay hot with 4-2 victory over Blackhawks
Tozeski's goal came off a scramble in front and was the result of prolonged zone time by the Tomahawks (10-3-3, 3-2-2).
Tomahawks rally in 3rd period
"Let's try to get some shots, try to recover some pucks, have some zone time. a The more emotion we have, the more we're playing loose and free, I think the better off it'll be."
Hawks watching Jokiharju's ice time
Despite sustained offensive zone time and 46 shots, Blaze weren't able to find a fourth way past Iles.
Blaze are left frustrated at home defeat; ICE HOCKEY
I thought we got better as the game went on and had lots of zone time. We went up twice in the third period and gave one back the next shift.
Weekend without win for the Blaze; ICE HOCKEY
She also cut 5.14 off 200 IM earning the AA time, 0.83 off 100 free, 2.50 off 50 back earning a new A cut, 1.10 off 50 free earning the team's second ever AAA cut and another zone time, 3.28 off 100 back earning a new AA cut and a state cut, 1.18 off 100 fly earning a new AA cut, and swam the 800 free in 11:17.95 earning an AA cut.
Full steam ahead Six local Bearsharktopus swimmers traveled to Indiana to compete
We are getting shots, chances, offensive zone time and just not finding the back of the net.
Blaze turn tables on Steelers; ICE HOCKEY
"We started playing that way a little the second half of the game, and we had a lot of offensive zone time, but we just couldn't get enough pucks on net with guys there."
Reign falls; Caps win in another overtime
But after Lafayette found seams in the Crusaders zone time and time again at the start of yesterday's Patriot League opener, Holy Cross switched to good ol' man-to-man and slowed the Leopards enough to escape with an 84-74 win.
Crusaders' man tames Leopards
"We got to figure out a way to get some offensive zone time. I feel like we've been playing on three-quarters of the rink for two games now.
Jets beat Wild to take 2-0 series lead